Wisconsin’s short growing season doesn’t provide a lot of time for growing cover crops.  However, the early harvest of winter wheat allows an excellent window for cover crops to grow, protect the soil and provide other benefits.

Cover crop recommendations typically change depending on where you are in Wisconsin but because of the early harvest of wheat, cover crop choices are pretty similar across the state.

Competition from volunteer or re-seeded grain from the combine can sometimes present a challenge.  If this is expected, it may be advantageous to allow growth of the volunteer grain to begin and apply a non-selective herbicide before planting the cover crop.  This may be difficult if the cereal grain is harvested after mid-July.

Oats and spring barley will grow rapidly in late summer and continue until a hard freeze. Spring barley and oats will typically have three months or more to grow after wheat harvest and will produce significant amounts of residue to aid in reducing soil erosion the following spring.  Barley and oats can also be harvested in the fall as a forage, however this reduces their effectiveness in reducing spring erosion.

Annual ryegrass (ARG) is a somewhat popular and economical cover crop but planting ARG is discouraged due to concerns with its potential to become a difficult to control weed.  It can overwinter in the Midwest with mild conditions. It can be a prolific seed producer in the seeding year and several glyphosate resistant biotypes have been identified.  If it over-winters, it can be difficult to control with herbicides.

Winter rye or winter triticale can be planted August-September for a late summer and over-winter cover.  Planted in August, rye will produce a thick cover in the fall and then will grow rapidly in early spring.  Rye and triticale used as cover crops need to be terminated by late April before they grow too large and become difficult to manage.  Rye and triticale can also be harvested in the spring as a forage

Radish (e.g., Tillage, Groundhog, NitrDaikon, oilseed or forage radish) is a fast growing cover crop, capable of producing a large taproot that can extend several feet deep if planted in July or August.  These radishes are often touted to alleviate soil compaction by “bio-drilling” down through compacted layers within the crop root zone.  Research suggest, however, that radish root growth can be restricted by compaction zones and often does not break up compaction.

Other brassicas: Turnips, Rapeseed, will have similar tap-rooting to radish, with less root volume.  Turnips typically winter kill, but depending on the variety, rapeseed will likely survive the winter and require herbicide termination in the spring. Due to a more rapid rate of decomposition, as compared to the grasses, monoculture stands of turnips and/or radishes often do not provide sufficient residue cover for erosion reduction. Choosing varieties that are slow to bolt and have limited hard seed will reduce the likelihood of volunteer plants during the next growing season.

All brassicas are good options to diversify rotations.  Because there are no brassicas in our traditional crop rotations, adding a brassica may help diversify the soil microbial community.

Legumes will fix nitrogen (N) as they grow and provide nitrogen to next year’s crop. Clovers are also harvestable as forage.  All are good choices for a wheat-corn-soybean grain crop rotation.  Legumes are typically planted in a mixture with grasses or grasses and brassicas in order to provide enough spring residue cover for erosion reduction.

Berseem clover is  fast-growing clover that will winter-kill.  Performance may be limited with dry conditions.

Crimson clover typically winter kills but may, in a warm winter, survive in Wisconsin.  It is slightly more tolerant of dry conditions than berseem, but pH sensitive.  Grows fast in spring if it survives the winter.

Research is very limited in terms of the soil health benefits that accrue from planting particular species of cover or green manure crops.  Some principles with likely merit: 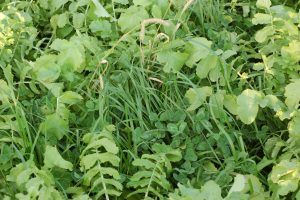 Here is a video on choosing cover crop for after wheat or early season vegetables in Wisconsin: