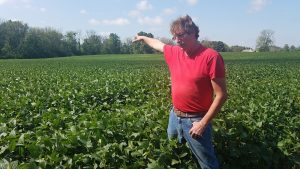 Allen has been farming alongside his Dad since he was 5 or 6 where his family started farming on 20 acres of Wisconsin land back in 1872. He’s rented land for 25 years, but has been running his own operation for about 5 years now, 20 miles North of Milwaukee on about 320 acres of homestead land and rents another 100 acres. He grows hay and makes bales for horse and cow feed, and different varieties of soy beans, corn, and wheat for human and animal consumption.

Allen is a conventional farmer who over the past few years has been using cover crops and minimal vertical tillage practices on his land – he only works the land once. Since starting his own operation, he has learned a lot from observing and helping other farmers – the way they fertilize, lay down their crops, etc. Allen emphasized the importance of farming smart and learning from each other. “It’s a tough game” he stated, “– if you don’t go with the change, then you’re out of it.” Since Allen rents land from the DNR he needed to develop a soil nutrient plan for his land. This plan helped him be more cost efficient farmer, analyzing what his land already has and what it still needs. “It’s like baking a pie – a recipe – which keeps you from spending money on things you don’t need.” When asked if he would try cover crops as a result of his land analysis, he proclaimed, “If you’re willing to ask me to try it, I may try it! Maybe I’ll learn some! Because we have to learn from each other.” As a result of his willingness to attempt new practices over the last few years, he now knows how his land can benefit from no-till cover crop practices, and that minimal vertical tillage is currently working well for him. His excitement to learn more about farming practices that reduce water run-off and soil erosion, keeping local creek and water systems clean, has helped fuel his persistence in utilizing cover crop and minimal to no-till agricultural practices.