One cover cropping practice used by winter wheat growers involves frost seeding medium red clover seed into the wheat during freeze-thaw periods, usually in March or early April.  The clover seed is broadcast over the fall-planted wheat, allowing the seed to fall into cracks and crevices on the soil surface.  Freezing and thawing at the soil surface helps achieve adequate soil to seed contact for eventual germination and emergence of the clover during spring warm-up.  Typically, the established clover doesn’t grow much beyond the seedling stage under the rapidly developing wheat canopy.  After the wheat is harvested, the clover has access to sunlight and will grow to provide a nitrogen-fixing, weed smothering, soil improving cover crop.  UW Extension guidelines suggest 60-80 pounds of nitrogen can be credited for a following year’s corn crop.  The red clover may also be harvested as a forage crop, possibly providing up to two tons of forage dry matter per-acre.

Success with this practice is dependent on a number of management and weather-related factors.  See http://ipcm.wisc.edu/download/pubsnm/redclover_0109.pdf for management guidelines.  Also, certain herbicides used in previous crops may inhibit clover establishment and may have implications for using the clover as feed http://ipcm.wisc.edu/download/pubsPM/Herbicide-Rotation-Restrictions_FINAL.pdf.  Inter-cropping with clover will generally not allow herbicides to be used for the wheat crop.

As mentioned above, if we have well-managed wheat, with a dense canopy cover, the frost seeded clover doesn’t get much past the seedling stage until after wheat harvest.  Research is limited, but observations suggest no apparent competition from the clover to the wheat.  However, in 2015, two cases were obs 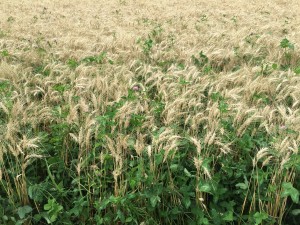 erved in southcentral Wisconsin where the frost seeded clover did present significant competition, decreasing yield of wheat grain and harvestable straw.  The two cases had similarities and differences.

In the first case, the wheat stand was somewhat light across the entire 11.5 acre field.  UWEX wheat specialist, Shawn Conley offers a benchmark of 70 stems per square-foot in the spring to indicate adequate wheat plant population and tillering.  Post-harvest stem counts from areas sampled across this field averaged only 53 stems per square-foot.  In fact, the seeding rate in the field was low at an estimated 1.3 million (live) seeds per-acre compared to the recommended seeding rate of 1.6 to 1.8 million seeds planted October 10.  In addition, the clover seeding rate ended up at 18 pounds per-acre (March 22), somewhat higher than the guideline of 10-12 pounds.  The slightly low wheat seeding rate and stem counts suggest the wheat canopy may not have been adequate to keep clover at bay.  The high seeding rate for clover may have helped it take advantage.  Wheat yield was estimated at 15-30 bushels per-acre less than expected and there was no harvestable straw.  In this case, the clover and wheat stem biomass left by the combine could have been harvested as forage, but was left as a tremendous green manure crop.

In the second case, the clover was competitively taller and thicker than normal only in repeating strips, or waves across the field.  The distance between strip centers was consistent with the width of the passes made in the broadcast clover seeding operation.  Clover seeding was done with an ATV-mounted spinner spreader.  It appeared the spread pattern was narrower, and less even, than the farmer anticipated, such that there was a higher seeding rate close behind the seeder with a diminishing rate outward to the sides.  In reviewing his GPS coverage map for the clover seeding, and comparing that with his GPS combine monitor wheat yield map, he determined that the denser clover (less wheat yield) generally matched up with the center of his ATV passes.  The likely cause of the problem: the clover seed used in 2015 was uncoated seed.  In previous years, the farmer had used coated seed in his seeder.  The uncoated seed likely flowed and spread differently than the coated seed used in previous years, resulting in a different spread pattern.

Post-harvest stem counts were higher at this farm than at the first.  But they were lower in the dense clover areas (64 stems/ft2) than in the clover-sparse areas (76 stems/ft2).  Wheat grain yield averaged 20 bushels per-acre less, as measured by the yield monitor, in the strips where clover was heavily competitive with the wheat.

There may also have been weather-related factors favoring rapid establishment of frost seeded clover relative to wheat growth in the fall and spring of 2014/15.  However, these observations point out the importance of managing each of the components in a cropping system such as this.  Winter wheat managed with the correct seeding rate, planting time and fertility is likely necessary for the companion frost seeded red clover to work.  If a wheat stand is determined to be light, perhaps due to winter kill, or is behind in growth at spring green-up due to late planting and slow growth, forgoing the frost seeding may be advisable.  Although, no threshold has been established specifically for this purpose, the 70 stems/ft2 may be a guide.

Perhaps more importantly for 2016, these observations also suggest care is needed when broadcast seeding to ensure the clover seed is distributed evenly across the field and at a rate that is not excessive.  Whether seeding with a broadcast seeder or a drill, it should be calibrated such that the rate and distribution pattern is known and adjusted as needed.  Guidelines for calibrating seeders can be found in a publication from the University of Arkansas at http://www.uaex.edu/publications/pdf/fsa-3111.pdf.  With clover seed cost at about $3.00 per pound this year, avoiding over-application makes economic as well as agronomic sense.

Thanks to Jeff Gaska, Farmer, Beaver Dam, WI for assistance with this article.