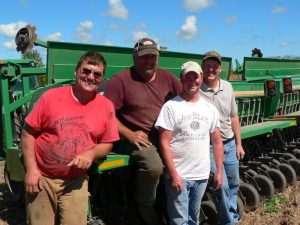 Jim is chair of the Milwaukee River Watershed Clean Farm Families and has been instrumental in interseeding cover crops into corn and beans at demo sites and his nearby area. He is a third generation dairy farmer located in Port Washington who owns 1,200 cattle on 1,500 acres of land and a leader in his producer led group.

Mike’s group is composed of large farmers in the Milwaukee River watershed area who are concerned about water quality and soil run-off. The group has been together for about a year now with the intention to educate the public and other farmers about water quality issues as they relate to agricultural practices, such as cover crops and low disturbance manure applications. “This year we put in a test plot of corns, soy beans, and barley and we’re working on putting seven different cover crops between the corn and the soy beans to see which ones are most compatible for our area.” The group is currently composed of about 8 members who collectively represent 7 to 8,000 acres of land within their watershed. They have also met with Dodge and Washington County’s producer led groups, and will be hosting a water and soil quality meeting in partnership with Dodge County this upcoming February. “Our biggest goal is to try and educate the public and take away some of the misguided thoughts that some people have against large dairy and agriculture farmers on the use of chemicals and pesticides in soil health –we’re trying to preserve as much as we can.” His advice to groups of farmers who want to start their own producer led groups are to keep talking to each other and to not let personal opinions interfere with the goals that are established together.