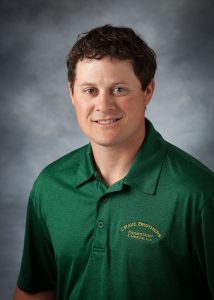 Jordan farms in partnership with his dad, 3 uncles, brother and cousin on about 2,600 acres of rented and owned land across Southwest Dodge County, not far from Waterloo.  The Crave family bought the farm back in 1981, where they now milk 1,850 cows on two sites and grow corn for silage, high moisture and dry corn, alfalfa, alfalfa/grass mix for forage, grass hay for dry hay, soybeans, and winter wheat.

Jordan has tried using cover crops on and off over the past 6 years. “Every year or two I’d try some here and there. Tried some annual rye grass, then I tried some oats at one point, I kind of dabbled at it a little bit.” After getting his feet wet with different cover crops, he decided in the fall of 2016 to plant quite a bit of covers after his corn silage. “I really liked what I saw and started just getting involved and learning a lot more about soil health, looking at all the benefits of reduced disturbance and no-till and combining those two things with covers.” Just a year later, in the Fall of 2017, he took a leap of faith and planted 100% of his corn silage acres and a large percentage of grain crop acres with covers. “At first I was motivated just from a nutrient management stand point – on paper anyways. In SnapPlus, there are some credits given for using covers. So, at first, the original goal was just to help with erosion control. I thought at the very least it would help with that, but then learning more about the benefits of feeding the ecosystem and decided to go more broad-scale.”

Since Jordan’s switch, he’s planted many kinds of covers, including annual rye grass, spring barley, oats, a couple mixes of annual rye grass, tillage radish, and dwarf essex rape, and his favorite for fall-seeded cover, cereal rye. He’s tried fall-seeding some oats in late September but was disappointed with the lack of growth, noting that he’d much rather use it in a summer mix than for fall-seeding. He’s also tried fall-seeding spring barley after corn silage after manure was applied. Though he was pleased with the results, he didn’t like how the cover crop winter killed. “We dairy farm, so a big part of my agronomy and nutrient management is manure. So for me, a big part of covers is incorporating them with my manure management. I’m looking for my covers to do more than just erosion control. I’m looking for them to help me hold my nutrients from fall applied manure and keep the nutrients available. Manure and other field equipment can be pretty demanding of the field and tough on the ground, so I think by having good root systems in place, and having better aggregated soils, it helps support the other things we’re trying to do.” He says in order to do this, he needs to have a green living crop on his farm through February, March, and April – whereas otherwise, fields are filled with brown, dead plant material. “For me, spring barley was a good stepping stone to get my feet wet, but I just tried it one year and jumped right over it. It’s easy enough because it winter terminates, but for me I wanted to have that crop start growing in the spring and harvesting the sunlight. It’s a great introductory cover crop for people – it’s super easy and it’s relatively cheap – but as far as moving forward and trying to get more out of the cover, I think being willing to have it growing in the spring and planning to either roller crimp it or terminate it chemically is what I’m looking at.”

Jordan also feels that cover crops have really helped him meet the soil loss and PI (phosphorus index) requirements of his Nutrient Management Plan (NMP).  Combining no-till and covers have dropped his soil loss “T” levels way down, to where it isn’t really a factor anymore. “They’re good on paper, but I can also see the realistic benefits in the fields.” He’s tried broadcasting his seed with a fertilizer spreader, lightly incorporating them with a vertical tillage tool, though he prefers using a no-till drill. He says that the vertical tillage tool works well, but moves more soil every pass, and that broadcasting is more dependent on rainfall and generally requires 20-25% more seed to successfully establish. “You can’t beat no-till drill placement for cover crops. It puts the seed where it needs to be, you get good seed to soil contact, you can put the seed to moisture, and you can meter it very effectively. It takes more time, and it’s a little more intensive, but it gets the job done right in my opinion.” With this in mind, Jordan hires his neighbor who farms about a quarter mile away from his dairy farm to use a 20’ John Deere no-till drill to seed all of his covers, and has been very happy with his success rates. “Something I’ve encouraged people who are thinking about trying covers to do is to consider that there are many different options.  If someone says to me, ‘I don’t have a drill.’ I may ask, ‘Well, do you have a VT or something to similiar?  Ok, well call the co-op, and have them go out there with a spreader and have them spread about 60 pounds of spring barley and hit it with your vertical till and you’re done!’ It doesn’t have to be a big undertaking.”

As Jordan looks forward into a new season of growth and cover crop trials, he’s set his eye out on a few new developments. Though he hasn’t used covers for forage, he’s looking into it at as a possible option in the future, depending on its economics. Before taking it on, he needs to figure out which crop he’ll follow cover forage with – since it’ll have to be a relatively high value crop and cannot have significantly high harvests.  He’s keeping his eye out on triticale, and would like to possibly use it for lactating cow forage, possibly following that with corn silage. In addition, he’s hoping that having these covers will reduce the amount of additional nitrogen he needs to buy by holding it in the soil and making it available later in the season. If he can reduce tillage, he’ll also save some money on owning and operating the equipment. “I think that no-till can work well by itself, but, I think when you pair it with covers it becomes a really great option.” Over time, he hopes that he can reduce his chemical input costs through weed suppression using cereal rye, helping combat herbicide resistance using natural weed suppression.

Jordan scans various online resources, such as the cover crops innovators emails, and enjoys talking with farmers and professionals in the field at various meetings, workshops, and field days. He also is a subscriber to the No-Till Magazine, noting that “they talk just as much about covers than they do about no-till” and is active in the Dodge County Farmers for Health Soil and Water group.

“Plan ahead. It’s helpful to have a plan in place and get the seed bought ahead of time so that when the combine or the chopper is rolling and you’re ready to put the seed in the ground, so you can get the most out of it.” When Jordan prepares for drilling cereal rye after corn silage, he has his seed bought in the early-middle of the summer, has already talked to his neighbor about drilling and calibrating the equipment, and has sent in his field maps and an approximate order he’s planning harvest so that once it gets close to corn chopping time, the plan is set and no time is wasted. The timing is so critical, he explains, “You don’t know when you’re going to catch a nice fall rain, or if you’re going to lose some good growing degree days, because in the fall, a week of good growing weather can make a tremendous difference on a fall seeded cover.” He also made sure to emphasize to give consideration to the planting maturity of your cash crops, and how that might impact your ability to fall seed covers. “This year I dropped my corn maturity by about 6 days deliberately because I think I can still reach a similar yield goal, but I know that I’m going to be able to bump up my fall seeding date on my covers by at least a week, maybe two. And again, that’s a really critical time period. That’s how far ahead I’m planning for my covers now. When I’m meeting with my seed corn salesman in December, I’m already planning on seeding covers in September.”