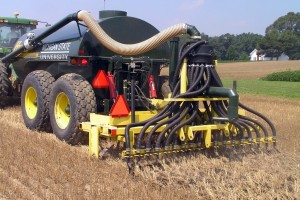 Michigan State University and Purdue University have a great web page on manure slurry seeding with fact sheets and videos.