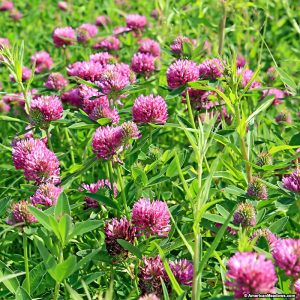 A short-lived perennial that is best companion planted with spring cereal grains or frost seeded (March-April) into fall established cereal grains.  The early-planted MRC will establish, but stay small until after grain and straw harvest in July or August.  It will then grow vigorously and is less susceptible to dry conditions or competition from weeds or volunteer grain.  Frost seeding has some risk and variability of results.  Success is dependent on having freeze-thaw conditions after complete snowmelt, as well as good broadcast delivery of the seed, to achieve an even distribution with good seed to soil contact.

60 to 80 lbs N can usually taken as a nitrogen credit for the subsequent crop.

Clip (mow or flail shred) or harvest clover after flowering in early September to stimulate new growth and control any weeds.  MRC will over-winter and will grow fast the following spring.  It is usually best to terminate with herbicide in the fall.  One quart of glyphosate + one quart of 2,4-D applied by October 15, in southern Wisconsin, is usually effective.  Some regrowth may occur in spring.  Tillage alone will take two or more passes to control prior to planting a subsequent crop.  Some re-growth will likely occur.

In a cover crop mix: