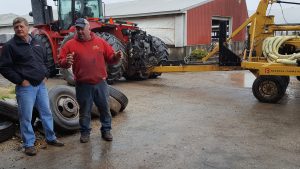 Mike’s farming operation is located in Fredonia, WI, North of Milwaukee, which he’s operated since 1976, when his family originally started working the land. Here, he grows alfalfa and corn to feed to dairy herds.

Mike originally started using winter rye ten years ago both for cover crops as well as an early Spring forage feed for dairy herds. His operation has since evolved where he’s now applying manure over the top and trying different harvest techniques, such as spraying the rye off with Roundup and harvesting it three days later. He also plants oats following his fall corn harvest to ensure that something is covering the soil at all times. Mike practices some no-till on his 800 acres, since his land isn’t very well suited for tillage. Being that his soil is composed of heavy clay, for the past three years he’s practiced reduced to no-tillage paired with small grain cover crops. Since then, he’s begun to see the benefits in his soil health, fertility, and structure and plans to continue practicing. “It’ll help reduce our tillage costs and keep our topsoil here, instead of letting it blow away or erode.” he explained. His participation in the NRCS Environmental Quality Incentives Program (EQIP) also contributes to his efforts to reduce run-off and erosion, where he’s begun to do some plant tissue testing to better utilize the nitrogen in the soil, so he doesn’t have to over apply. As he looks forward, he’s interested in exploring different kinds of cover crops outside of small grains, wondering if cover crops such as radishes or clover provide different or bigger benefits.