Establishing cover crops after corn and soybeans is a challenge in Wisconsin due to the minimal amount of growing season left after harvest.  Interseeding a cover crop during the vegetative growth of these crops provides Wisconsin farmers a cover crop establishment method earlier in the season.

Please note that our Wisconsin research on this planting method is limited so our recommendations are still in the development phase.  Because of this, farmers that wish to try out interseeding, should try it on small acreage first.

Interseeding should take place in early to late June when corn is between V4 and V7 growth stages. In Wisconsin research trials, the cover crops have been seeded using a modified no-till drill to seed the cover crops inter-row.

Red clover and cereal rye have been the most successful species for interseeding in Wisconsin trials.  In the two years of research trials, they both  survived under the shady corn canopy and did not negatively impacted corn yield.  Here is a video talking about the results:

Research on interseeding cover crops into soybean in Wisconsin is just beginning.  Results will be posted when they become available.

Penn State has been a leader on cover crop research. Check out their article on interseeding :
Improving Success with Interseeding

Also, check out this video from Penn State on interseeding with a drill or broadcast application:

Aerial or high clearance seeding equipment provides farmers a method to overseed cover crops into a standing crop late in the growing season.  Seed germination is dependent upon soil and environmental conditions following seeding. Soil moisture, the density of the crop canopy and the presence or slugs can impact the likelihood of cover crop  success.

The timing of seeding is vitally important for the success of late season cover crop seeding.  Cover crops seeded too early will starve for sunlight, creating a long leaf and a shallow root, eventually turning white and dying.

Here are some recommendations for timing and situations that will create success:

Corn for silage (or seed corn) – Cover crops should not be seeded into corn for silage more than 2 weeks prior to harvest.  For big dairy farms it might make sense to seed cover crops when silage harvest begins so that the latest harvested fields will be off within 2-3 weeks of seeding.

Soybeans – seeding should be done once the soybean plants have begun to dry down, with about 50% leaf drop/yellow leaves. Soybean row width may limit the equipment used for seeding.

Spring barley or oats may be an options for early harvested corn silage in Wisconsin but cereal rye or tricale are going to be the only options for later harvested silage fields and corn grain and soybean acres.  One bushel/acre is generally a high enough seeding rate for all of these cover crops.

Slugs are becoming a major challenge for late season, broadcast seeded fields.  Slugs love to eat cover crop seed, particularly cereal rye and triticale.   Prior to seeding, farmers should put out several boards in the field overnight.  Check the bottom of the board the following day to see if there are slugs.If a field has slugs, it is not recommended to broadcast seed cover crops.

Michigan State University and Purdue University have a great web page on manure slurry seeding with fact sheets and videos.

Cover crops can be broadcast seeded and then incorporated with a vertical tillage or other type of tillage pass.  Several equipment manufacturers have added air seeders to their tillage tools to combine these activities into one pass.

Generally. this is an effective way to plant cover crops, although, the cover crop stand may not be as uniform as a if it was planted with a drill.  Below are pictures of a rye cover crop planted after corn silage in Dane County, WI. In the picture on the left, the rye was drilled and on the right the rye was planted with an air seeder on a vertical tillage tool.  The stand on the left is slightly more uniform and has more growth from increased soil to seed contact. 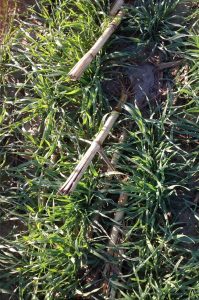 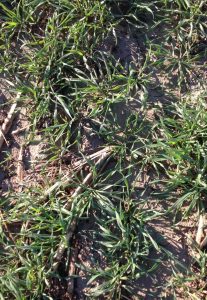 This video shows an example of an implement mounted air seeder:

In the video below, Dan Perkins, a Soil and Water Conservationist in Indiana, shows a vertical tillage tool that was modified with an air seeder for seeding cover crops into filter strips in the spring and into fields during the fall.