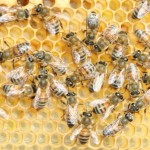 The federal government has proposed tighter restrictions around two insecticides that are harmful to bees, but stopped short of an all-out ban.

Health Canada announced new mitigation measures today on the neonicotinoids​ clothianidin and thiamethoxam, pesticides which are sold as seed treatment or sprays to protect agricultural crops from various insects.

Under proposed changes, the product will be banned from some uses such as orchard trees or strawberry patches. Restrictions are on the way for other uses such as on berries and legumes.

New measures will also require new labelling for seed treatments, which will still be permitted.

“Scientific evidence shows that with the proposed restrictions applied, the use of clothianidin and thiamethoxam does not present an unacceptable risk to bees,” said Margherita Conti, an official with Health Canada’s pest management regulatory agency.

‘Half-pregnant’ approach
Beatrice Olivastri, CEO of Friends of the Earth Canada, said pressure from pesticide manufacturers and users led to the government’s “gutless” and “inadequate” response.

“That’s not addressing the long-term issues we have with these pesticides building up in the soil, building up in the wildflowers, in the vegetation,” she told CBC News. “It’s like a half-pregnant approach. It’s impossible, what they’re doing, in terms of having a positive impact.”