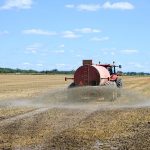 Consider the case of nitrate, primarily tied to agricultural fertilizers, and the 2017 report by the Wisconsin Groundwater Coordinating Council. The council is comprised of state agencies with responsibilities for groundwater management, plus a governor’s appointee.

The section of the report devoted to nitrate in groundwater is alarming to say the least, but the report went almost unnoticed. Maybe that’s because nitrate contamination is nothing new. What is new is research linking the water-soluble molecule to an array of health concerns.

There’s growing evidence of a correlation between nitrate and diabetes, the report notes. Birth defects have also been linked to nitrate exposure. While more research is needed on birth defects, “These studies collectively indicate an ongoing need for caution in addressing consumption of nitrates by pregnant women,” the report says.

It goes on to note that in the human body, nitrate can convert into compounds “which are some of the strongest known carcinogens.” As a result, health concerns related to nitrate-contaminated drinking water include “increased risk of non-Hodgkin’s lymphoma, gastric cancer, and bladder and ovarian cancer in older women.”

The health-based enforcement standard and maximum contamination level (MCL) for nitrate in public wells is 10 parts per million (ppm). This number was set because of concerns about another health issue, so-called blue baby syndrome, in which infants exposed to nitrate are deprived of oxygen. Some brush off this concern and advocate for a higher threshold. Given the information in the 2017 report, maybe we should go the other direction.