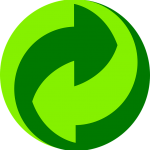 China doesn’t want our dirty recyclables any more. Watch the video about needed changes to our recycling programs.