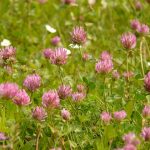 Long strips of bright wildflowers are being planted through crop fields to boost the natural predators of pests and potentially cut pesticide spraying.

The strips were planted on 15 large arable farms in central and eastern England last autumn and will be monitored for five years, as part of a trial run by the Centre for Ecology and Hydrology (CEH).

Concern over the environmental damage caused by pesticides has grown rapidly in recent years. Using wildflower margins to support insects including hoverflies, parasitic wasps and ground beetles has been shown to slash pest numbers in crops and even increase yields.

But until now wildflower strips were only planted around fields, meaning the natural predators are unable to reach the centre of large crop fields. “If you imagine the size of a [ground beetle], it’s a bloody long walk to the middle of a field,” said Prof Richard Pywell, at CEH.

GPS-guided harvesters can now precisely reap crops, meaning strips of wildflowers planted through crop fields can be avoided and left as refuges all year round. Pywell’s initial tests show that planting strips 100m apart means the predators are able to attack aphids and other pests throughout the field. The flowers planted include oxeye daisy, red clover, common knapweed and wild carrot.