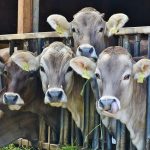 Replacing traditional crop-based animal feed like soybeans, with food made from microbes, could save several hundred million hectares of land, a new study finds.

While this might seem futuristic, the idea actually goes back to the 1970s. That’s when scientists first started growing huge quantities of bacteria, yeast, fungi, and algae at industrial scales in large fermenting vats, providing them with sugar, natural gas or hydrogen gas as an energy source. The fast-growing microbes could then be dried and converted into a protein-rich powder for farm animals to eat. But five decades ago the technology was neither advanced enough, nor economical enough, to compete with regular crop-based feed.