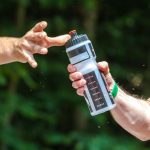 The study started as an accident. Geneticist Patricia Hunt of Washington State University and her team were investigating the reproductive effects of BPA in mice. Housed in BPA-free plastic cages, the test group got doses of BPA through a dropper; the control group didn’t.

Everything seemed rosy—until it wasn’t.

“Our control data just started to get really wonky,” Hunt says. The differences between it and the test group vanished, and many control mice started showing genetic issues. Though initially confused, the team discovered that some of the plastic caging was damaged and was leaching bisphenol S, or BPS—an alternative to the now infamous plastic component BPA.