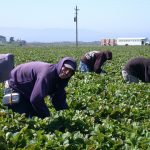 It’s been weeks since he harvested his farm’s grains, and though Casey Bailey’s fields are mostly bare, something is brewing below.

He kneels on the ground, covered by a thin layer of straw as far as the eye can see, and prods gingerly into the soil. Barely scratching the surface, he points to white, fiber-like strands—hyphae, the filaments of a fungus—a worm and then a spider racing for cover.

“The soil organisms, there’s like a billion in a teaspoon,” he says. To Bailey, whose livelihood depends on soil, it’s a sign that one of his experiments is paying off.