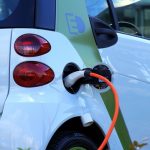 With financial partnership from the Wisconsin State Office of Energy and Madison Gas and Electric, the city of Madison announced this Tuesday it will purchase 20 additional electric vehicles by 2020 and charging stations.