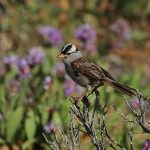 Neonicotinoids are harming more than bees.

Migrating songbirds exposed to small amounts of a neonicotinoid pesticide suffered weight loss and migration delays, both of which could reduce their chances of survival, according to a new study.

The study is the first to examine the impacts of neonicotinoids—in this case, one called imidacloprid—on wild birds and suggests the pesticides are putting migrating birds at risk during their migration, which hampers their ability to survive and, ultimately, reproduce.