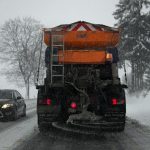 While Americans may dream of a white Christmas, living with snow the rest of the season is driving a nightmare salt habit.

Each year, Americans spread more than 48 billion pounds of salt on roadways to ward off the effects of winter weather. But it comes at a cost: De-icing salt degrades roads and bridges, contaminates drinking water and harms the environment, according to a slate of scientists expressing growing alarm.