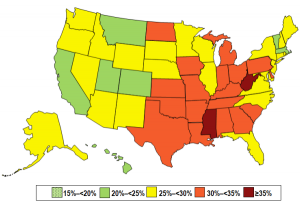 Prevalence of Self-Reported Obesity Among Adults by State, BRFSS, 2013

The CDC did indicate that obesity levels derived from self-reporting are often lower than when weights are taken by health professionals.