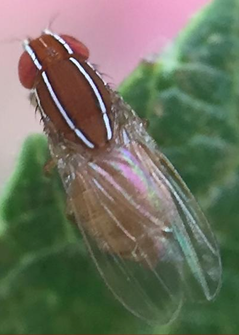 Why are we writing about a pest that affects a primary host crop that we don’t grow in WI?

“The African fig fly (AFF), Zaprionus indianus, is an invasive vinegar fly closely related to flies in the genus Drosophila [which includes the common vinegar fly (also sometimes called the common fruit fly) and spotted-wing drosophila (SWD)].  AFF is native to Africa, Eurasia and the Middle East.  It was first detected in the United States in Florida in 2005, where it is now well established.  In 2012, AFF (a single adult) was first detected in Wisconsin.  In 2017, larger numbers of AFF were found in the state in traps used to monitor for SWD.

Outside of Wisconsin, AFF has had its biggest economic impact in commercial fig production, and has not been found to have a significant economic impact on other agricultural crops.  In Wisconsin, the potential economic impact of AFF on fruit and other crops is not yet known.  Because AFF reproduces readily and can rapidly expand its range, careful monitoring for this insect in the state is warranted.”

For more information on this pest, check out factsheet XHT1267.

To get connected with the current Master Gardener Association officer team, please contact the Extension office at 608-297-3141.