The MSiHS program consists of a series of partnerships between local Head Start programs and University of Wisconsin-Extension Family Living Educators. The MSiHS program offers a mixture of three financial literacy interventions—monthly newsletters, financial education workshops, and financial coaching—to parents with children enrolled in Head Start or Early Head Start. Head Start families were the focus of this program because they have low-incomes and are therefore vulnerable to financial shocks.

During the 2010-2011 school year, families in 16 counties across Wisconsin participated in the Money $mart in Head Start (MSiHS) program. This was the program’s second year, following a smaller pilot during the 2009-2010 school-year that involved seven counties. Select centers were chosen to be comparison sites for this research project which means they did not receive financial education resources during the research phase in order to determine differences in financial interventions.

The results of this research project demonstrate that Money $mart in Head Start participants report feeling less worried about finances and having less difficulty paying bills, plus they are 92% more likely to have a written budget than households not in the program. Households that participated in workshops and/or coaching reported even greater gains in managing debt and their ability to save than households receiving only the monthly financial newsletter.

Several charts highlight the follow-up survey findings.  For example, in the chart below you can see the control group (receiving no services) fared worse in terms of managing debt (they had more difficulty), ability to save, and downloading their credit report.  The group receiving only the newsletters reported gains in these 3 categories.  And those households receiving the newsletter and attending a workshop and/or participating in coaching, reported the most gains – especially when it came to managing their debt.  (A negative means less difficulty for this first category.) 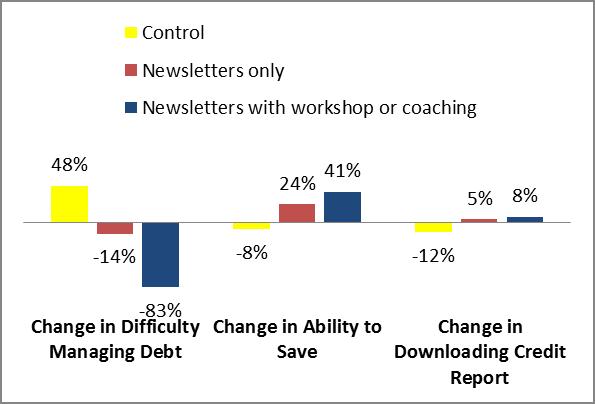 The report concludes that overall, the results suggest that taking part in programs related to M$iHS is associ­ated with both positive attitudes and behaviors. This UW-Extension financial capability initiative offers a highly useful resource for increasing financial security with limited income, young families.

Customize this word document,  M$iHS Impact Summary for Partners, with your contact information to share the latest information. It includes a project overview, baseline survey findings, a description of the monthly newsletters and the financial literacy workshops.You may also want to read the Family Living Programs Impact Report Increasing financial capability for families: Money $mart in Head Start from April 2012 here.

Educator resources are available on SharePoint.