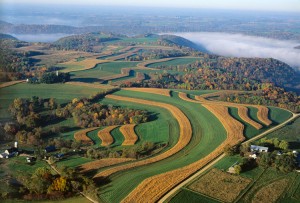 “Agriculture remains an important part of the Wisconsin economy,” said Steven Deller, a UW-Extension community development specialist and professor in the UW-Madison agricultural and applied economics department. “Even in the most urban parts of the state, agriculture’s contribution is notable.”

The study is a follow-up to one that Deller conducted five years ago using 2007 data. He found that agriculture has risen in importance for the Wisconsin economy, despite the combined effects of the drought of 2012 and the Great Recession. It generated $29 billion more economic activity in 2012 than in 2007 and an additional 59,509 jobs.  In 2012 it accounted for 11.9 percent of the state’s overall employment (up from 10 percent in 2007), 10.9 percent of labor income, 10.9 percent of total income, and 16.1 percent of industrial sales.

About one in nine people working in Wisconsin hold a job related to agriculture, the new study indicates. They include farmers, their employees and those providing them with goods and services—veterinarians, crop and livestock consultants, feed and fuel suppliers, equipment dealers and lenders—as well as those employed in equipment manufacturing and food processing.

The impact varies by region. In southwestern Wisconsin, agriculture accounts for 24,200 jobs or 18.1 percent of total employment, most of it related to on-farm activities. In southeastern Wisconsin, the most urban part of the state, agriculture contributes 50,900 jobs or 4.3 percent of total employment, mostly in food processing.

“When we think of agriculture, we must move beyond focusing within farm gate and consider food processing as an important part of the Wisconsin economic cluster,” Deller said.

It’s also important to look beyond dairying, he adds. “Although one may traditionally think of Wisconsin as the ‘Dairy State,’ the truth is that agriculture is diverse and is likely becoming more diversified across the state. Other parts of Wisconsin agriculture such as the beef industry, vegetables, breweries and more specialized activities like hops, grapes, and wineries are growing in size and importance.”

The full report “Contribution of Agriculture to the Wisconsin Economy: Updated for 2012” is online and can be found at http://wp.aae.wisc.edu/wfp/contribution-of-agriculture-to-the-wisconsin-economy/.

Support for this work was provided in part by the Office of the Dean, University of Wisconsin-Extension, Cooperative Extension; Office of the Secretary, Wisconsin Department of Agriculture, Trade and Consumer Protection; and the Wisconsin Milk Marketing Board.