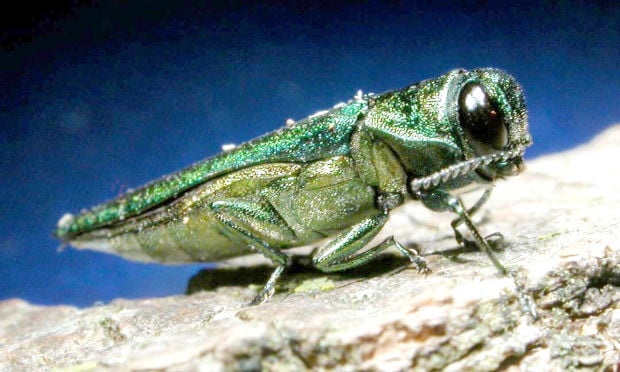 Sevie Kenyon: Taking a look at the emerald ash borers in Wisconsin, we are visiting today with PJ Liesch, Department of Entomology Insect Diagnostic Lab University of Wisconsin-Madison in the College of Agricultural and Life Sciences, and I’m Sevie Kenyon.

PJ, give us an idea of what we are looking at with emerald ash borer this season.

PJ Liesch: Last year, 2014, was a rather interesting year when it came to emerald ash borer. If you looked at the map at the beginning of 2014 we only had a little over twenty or so counties quarantined at the state, but by the end of the year we added sixteen more counties to the state quarantine, which brought us up to thirty-seven.

Sevie Kenyon: What broke down, what caused the spread?

PJ Liesch: Well it’s hard to tell with this insect because when there’s an early infestation signs and symptoms of the insect might not show up for three, four, five years, and so it can be hard to look back into the past and figure out exactly what happened. It could have been someone moved firewood or some type of wood material that spread it around, but it’s hard to tell.

Sevie Kenyon: Tell us a little bit about the emerald ash borer itself, how it lives, what it does.

PJ Liesch: The adult beetle is a small metallic green beetle about half inch long, and when they emerge usually in mid-June or so, they will feed on the leaves a little bit, on the trees but they don’t cause much damage at all. They are going to mate and lay eggs and then those eggs, which are on the bark of the tree are going to hatch, and the small larvae are going to chew through the bark and then they are going to spend the rest of their existence living beneath the bark of that tree. Feeding on the tissues that transport water and nutrients and so when they feed they are essentially girdling that tree from the inside out. Eventually they are going to spend the winter become pupae and then emerge as adults the following summer.

Sevie Kenyon: And what are the recommendations for preventing the spread and helping these trees?

PJ Liesch: Well first and foremost one of the big things is: don’t move firewood. There are all kinds of insects, including emerald ash borer that can be in the firewood and so if we are moving that around that’s going to make the situation worse. If you live in an area where we experience emerald ash borer, such as Madison and many other portions of southern Wisconsin and you have one or two or a few ash trees in your yard, we do have some treatments available that can be very effective if used properly. Otherwise, if you have more ash trees, we just don’t have any treatments that are available to protect large areas and so you might have to go through and do some kind of selective logging or thinning program in woodlot or forest situation.

Sevie Kenyon: But what is the extent of the habitat of the emerald ash borer?

PJ Liesch: EAB, or emerald ash borer, can affect all of our native ash trees in the State. We have four species; white, green, black and blue ash, so all those can be affected. The numbers I’ve seen, we have about 700 million ash trees in the state so that’s a lot of trees that could potentially be affected.

Sevie Kenyon: We’ve been visiting with PJ Liesch, Department of Entomology Insect Diagnostic Lab University of Wisconsin-Madison in the College of Agricultural and Life Sciences, and I’m Sevie Kenyon.