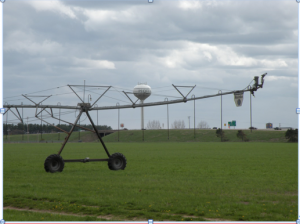 The model shows that both irrigation wells and municipal wells affect the Little Plover River.

Madison, Wis.— Both irrigation wells and municipal wells affect flows in the Little Plover River near Plover, Wisconsin, stretches of which ran dry in past years, according to a new scientific report.

The Wisconsin Geological and Natural History Survey and the U.S. Geological Survey have released the results of a three-year project to develop a groundwater flow model for an area around the Little Plover River in Wisconsin’s Central Sands agricultural region. The model is a state-of-the-art scientific tool that can be used to help make informed decisions about high-capacity well placement and pumping, as well as land use in the region, which stretches from southern Adams County to north of Stevens Point.

The project was carried out jointly by the Wisconsin Geological and Natural History Survey and the USGS Wisconsin Water Science Center. In addition to the groundwater flow model, researchers developed a report (Bulletin 111) and a user’s guide to the model.

The groundwater flow model was commissioned by the Wisconsin Department of Natural Resources with the goal of demonstrating the scientific relationships among groundwater, lakes and streams and high-capacity well withdrawals. The Wisconsin Potato and Vegetable Growers Association also contributed funding and information for the project.

“This model is a tool for testing and evaluating different ways to manage the groundwater in the Central Sands region,” said Ken Bradbury, state geologist and one of the authors of the report.

The model includes all high-capacity wells in the region installed before 2013, when modeling began, and simulates seasonal variations in groundwater recharge, irrigation needs and well pumping.

“The techniques and data combined in this project illustrate how groundwater modeling can be used for resource management in other similar areas of Wisconsin and the nation in the future,” said Michael Fienen, a USGS hydrologist and one of the report authors.

The completed model serves as a powerful tool for testing and demonstrating alternative water-management scenarios. For example, it can simulate how the cumulative impacts of pumping and land-use changes have affected flow in the Little Plover River. It can also be used to predict which wells and well locations would have the greatest impact on nearby lakes and streams.

The new model is a sophisticated tool intended for use by environmental professionals such as DNR staff, consultants and academic groups. It provides a uniform, unbiased starting point for investigations of different water management alternatives.

The report and model are available at http://wgnhs.org/little-plover-river-groundwater-model.