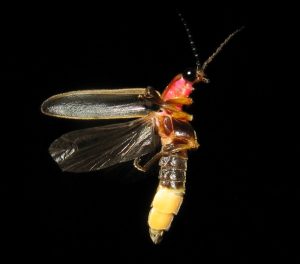 Lorre Kolb: Fireflies, nature’s fireworks. We’re visiting today with P.J. Liesch, Department of Entomology, Insect Diagnostic Lab, University of Wisconsin-Madison/Extension, in the College of Agricultural and Life Sciences, and I’m Lorre Kolb. PJ, tell us, what is a firefly?

P.J. Liesch: So, firefly, believe it or not, is actually a type of beetle and in Wisconsin and Great Lakes area we actually have somewhere in the ballpark of two dozen or so different firefly species. They all can look slightly different under the microscope and they can have different habits, but in general fireflies are most frequently associated with damp areas. The reason for that is the juvenile stage, or the larvae, they like to live in damp soil, rotting logs, and similar locations, where they are predators of slugs and snails, which we know also like those damp areas. Fireflies themselves can be kind of hit or miss, if you’re in a more urban area or an area with sandier soil that doesn’t hold in as much moisture, you might not see as many of them, whereas if you’re in a particular river valley with nice rich soil, you can really have lots and lots of fireflies around.

Lorre Kolb: So, when do the fireflies appear, seasonal wise?

P.J. Liesch: It’ll depend a little bit on the species, but most spots in the state, we start really noticing fireflies in June at some point. Maybe the first week in June through early July can be kind of the hotspot or best time for viewing fireflies, although we actually have some firefly species that don’t light up and you can find them at other times of the year as well, but folks notice them mostly in June and July.

Lorre Kolb: How do they light up?

P.J. Liesch: So, they actually have some biochemical reactions in their bodies that simply generate light and they can use that really to signal to other fireflies for mating purposes, although some species will use that to trick the males of another species and lure them in and actually feed on them.

Lorre Kolb: So, is there a way to attract the fireflies if you want your backyard to be a firefly haven?

P.J. Liesch: Well, in general, what I would say along those lines is making your backyard as diverse as possible. If you have lots of diversity in terms of flowers and mulch bed areas and things like that, you’re going to potentially attract not only fireflies, but also many other beneficial insects, predators and pollinators and things like that, and the more diversity we have in our landscape around us the better the chance you’ll have of attracting fireflies.

Lorre Kolb: What are the benefits of having fireflies?

P.J. Liesch:  Technically, they are predators, as larvae, and so if you have a lot of slugs and snails, and a lot of folks in the state do, because it’s been very rainy this year, as well as last year, and so if you have slugs around you’re probably going to have some fireflies around feeding on them as well. So, they are beneficial in that regard.

Lorre Kolb: We’ve been visiting today with P.J. Liesch, Department of Entomology, Insect Diagnostic Lab, University of Wisconsin-Madison/Extension, and the College of Agricultural and Life Sciences and I’m Lorre Kolb.