The 2017 Field and Forage Crop Season 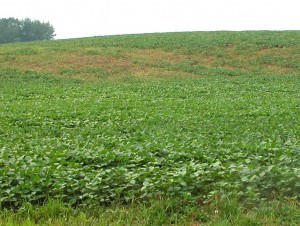 Lorre Kolb: The 2017 field and forage crop season. We’re visiting today with Damon Smith, Extension Field Crops Plant Pathologist, Department of Plant Pathology, University of Wisconsin-Madison/Extension, in the College of Agricultural and Life Sciences, and I’m Lorre Kolb. Damon, can you just give us an overview of the 2017 growing season?

Damon Smith: Yeah, it’s been cool and wet and now hot and dry, and so we’ve had some challenges just from mold early in the season to now just trying to finish the crop out. So, that creates a lot of challenges for farmers either way.

Lorre Kolb: So, what are some hot issues that you’ve seen this past year?

Damon Smith: First, in grain crops, we’ve had quite a few white mold problems in soybean and so we’ve gotten quite a few questions there and we’ve scouted a number of fields across the state this year. The southern part of the state probably not hit as hard with white mold as the central and northern part of the state, but pretty significant up north where we had quite a bit more rain and cooler temperatures early this season, which led to that white mold problem. On the forage side of things, we’ve been getting quite a few questions on silage corn and whether we’re going to have mycotoxin issues this year. We’ve had two pretty consistent years with mycotoxin problems now in silage corn, and so, you know, if we look into the crystal ball for 2017, I think that maybe it’s not going to be quite as bad as the last two seasons, just because the fall has turned out dry for us, and so that’s helped reduce the amount of increase of the fungi that produce mycotoxins. With that said though, I think folks should still be diligent about checking the crop, doing some scouting before they chop silage or harvest even grain corn. If they see damage on ears and that sort of thing, they should definitely get some mycotoxin testing done both going into storage and then coming back out of storage.

Lorre Kolb: What about research?

Damon Smith: Research-wise, we’ve been doing quite a bit of white mold working, looking at disease prediction models for white mold and then also resistant varieties, and so we have a number of tools coming along and a resistant variety, hopefully for at least seed increase release for 2018. So, this will be the first white mold resistant soybean variety to come out UW since 1970, which is pretty neat, and then we also have our disease prediction model, which should be automated as an app available for the 2018 season, as well.

Lorre Kolb: You also have some pest management update meetings coming up around the state?

Damon Smith: We do. So, the week of November 6th through the 10th, we’re going to be doing three-hour pest management update meetings. The first half of those meetings will be general updates and research results, and then the second half of the meeting will be basically composed of a hands-on workshop and then there is three hours of continuing education credits for crop consultants.