Leasing of woodlands provides a potential alternative income stream for woodland owners. It also provides hunters or other recreational users surety in when and where they will go to pursue their activity. However, part of pending legislation (Wisconsin Senate Bill 162) would repeal a ban on recreational leasing of Managed Forest Law (MFL) lands, which has led to concern among those interested in maintaining public access when lands receive tax breaks.

Roughly 30,000 of the state’s  174,000 eligible landowners are enrolled in the MFL. These individuals, families, and legal entities (e.g., LLCs) own 2+ million acres, roughly a  fourth of all private woodlands.

Few estimates of leasing are available. U.S. Forest Service data show that 8.5% of small woodlands are leased in Wisconsin. Reasons for leasing include grazing, hunting, timber and non-timber products, and recreation. Further details emerge from a 2010 survey of woodland owners not enrolled in the MFL that helps answer two questions.

Analysis for this post depends on survey responses from 821 landowners who were (1) not enrolled in the MFL, (2) owned a minimum of 10 wooded acres and maximum of 500 total acres, and (3) completed the question, Do you receive payments or other benefits for allowing other people access to your land, such as leasing land for hunting? Overall survey response rate was high, 68.5%, and the analysis likely reflects woodland owners across the state.

6.0% of woodland owners indicated that they leased their land activities such as hunting. 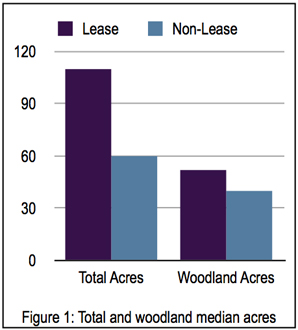 There were no differences on key tenure metrics. For all respondents median decade of land acquisition was the 1970s, roughly half lived on or beside their woodlands, and more than half visited their property at least once per month.

As to reasons for landownership, no differences were found for most reasons, including hunting, privacy, and recreation. However, those who lease rated real estate investment and income from forest products as more important. They also report being somewhat likely to sell or transfer ownership of any portion of their woodlands in the next ten years. Those who don’t lease were somewhat unlikely. All three differences were statistically significant.

Demographically, respondents did not differ in age (median = 59 years) or 2009 pretax income (median = $50-$75K). However, there was a slight statistical difference in educational attainment, with those who lease completing more education.

Available estimates suggest that leasing is a relatively uncommon management activity that effects 7-9% of private woodlands. Economics appear to be the primary motivation. Such considerations are likely more acute for non-MFL enrollees, who likely pay considerably higher property taxes.

The net effect, though, is relatively small for at least two reasons.

First, leasing competes with a relative abundance of public lands and open MFL land primarily in the North. A trend toward more MFL acres closed to public recreation may alter this over time.

Second, providing and overseeing leases require effort and commitment. Given that most woodland owners hold land for personal reasons that may be competitive with leasing (e.g., hunting), widespread adoption seems unlikely.

The study was conducted by the University of Wisconsin-Madison/Extension in collaboration with the WI Department of Natural Resources and the UW Survey Center. The Energy Center of Wisconsin funded this study (grant #09-08/3104-01-09 EERD Research).

Any errors or all interpretations are the sole responsibility of Mark Rickenbach. Please contact me for more details (click my name).

Just a clarification on the 8.5% of leased land

This reflects parcels of 10 or more acres. If you include all private woodlands, the percentage drops to 8.1%.

As noted above, someone spotted an error in my statistics for private landowners in Wisconsin. It appears that when I was totalling numbers, I missed a column in the US Forest Service data (i.e., National Woodland Owner Survey) I was looking at. My apologies.