Wisconsin logging businesses have not experienced much change in terms of the way they harvest and process trees.  We compared the harvest systems that respondents used to fell and process timber by their 2003 and 2010 production years. For our analysis, we separated survey respondents into one of four categories based on their use of one or more harvesting technologies.

All harvesting systems, including fully mechanized operations such as feller-buncher and cut-to-length, occasionally use chainsaws to fell and process large diameter trees that exceed the size capacity of the equipment.

In 2003 and 2010, the dominant logging system used in Wisconsin was the cut-to-length system: 43% and 49% of businesses, respectively, used this system. The other three were also similar in their respective 2003 and 2010 portions. 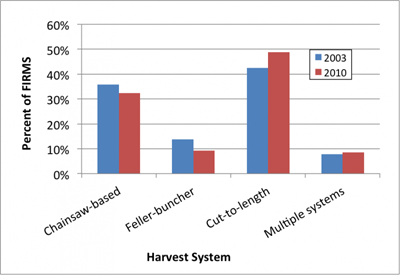 We also compared the percentage of total volume that was harvested by each system.  Harvest volume was self-reported by loggers in a variety of units (e.g., thousand board feet, tons) and converted to cords for a standard measurement unit.  In 2010, Wisconsin loggers employing the cut-to-length system accounted for nearly 2/3 of the volume harvested (65%), followed by multiple-system firms (16%), chainsaw-based (12%), and feller-bunchers (7%).  These percentages tracked closely with those reported in 2003. 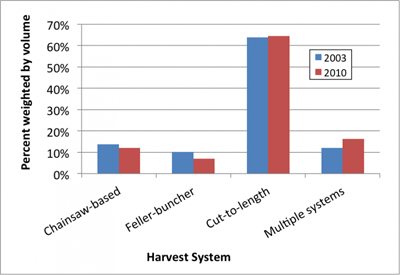 Delving further into production volume by harvest system, we found that harvest volumes can vary substantially by system. Not surprisingly, hand-felling operations generally produce less volume than mechanized systems.  Two of the four categories showed increases in median cord production from 2003 to 2010, feller-buncher (2,566 cords to 2,812 cords) and multiple-systems (5,906 cords to 8,000 cords).  While both cut-to-length (7,000 cords to 6,263 cords) and chainsaw-based (1,533 cords to 1,513 cords) had slightly lower median cord volume production from 2003 to 2010. 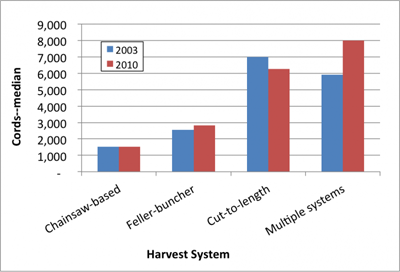