One of the most common workforce issues in forestry is the aging workforce. The logging workforce story in Wisconsin has two novel and important components, the age of owners and employees and the use of subcontractors.

A previous post discussed the demographics of the owners. The median age in 2016 was 56 years for logging business owners in Wisconsin. This is part of the story and we know that many of the owners do not have a plan for the succession of their business. The other part of the story is that there are younger workers in the woods. Overall a third of logging company employees were over 55, but 63% were 25-55 years old. If we look specifically at woods workers, 27% are over 55, 61% are 25-55 and 12% are under 25, so we can expect to see a few young faces at logging sites.

Table 1. Age demographics of logging business employees in Wisconsin in 2016 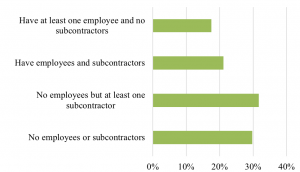 Figure 1. Employees and subcontractors in Wisconsin logging firms in 2016

Table 2. Age demographics of logging business subcontractors in Wisconsin in 2016

We also found that most subcontractors on the logging site had contracts lasting for more than 6 months and only 8% worked for one month or less.

Table 3. Length of contract for subcontractors working in the woods in Wisconsin in 2016

Table 3. Tenure of subcontractors working in the woods in Wisconsin in 2016

The latest data provide new insights into the number of subcontractors working in the logging industry in Wisconsin and their demographics. Why are we so curious about subcontractors? One reason is that they are not captured by common U.S. Census surveys. The most complete source of employment and wage information in the U.S. is the Quarterly Census of Employment and Wages (CEW). It covers more than 95% of “jobs” in the U.S., where a job is defined as a full or part-time position that is covered by state or federal unemployment insurance laws. The data are reported based on an occupational code. For example, the code for loggers is 1133. Because sub-contractors are not subject to the same unemployment insurance laws, their positions are often not counted or counted in a category other than logging.  This wouldn’t matter if there were only a handful of subcontractors in the woods, but our findings indicate there are more subcontractors than employees in the Wisconsin logging sector.

These jobs are incredibly important and we want to be sure they are included in the jobs numbers for the Wisconsin Forest Industry. The CEW for 2016 lists 260 logging businesses in Wisconsin and 769 “employees” but if we include subcontractors that number might be more than double. Those subcontractors earn wages and contribute to the economy of Wisconsin and should be “counted.”