After accounting for bad addresses, non-loggers, etc., response rates for all studies were high. The 2016 response rate of 62%, similar to the 2003 and 2010 surveys that yielded 59% and 63%, respectively. However, the two prior surveys included follow-up calls that reduced the effective sample size (i.e., many who received questionnaire and didn’t respond weren’t loggers). Of note, the 2003 response rate was for the entire survey, which included both Wisconsin and Michigan’s Upper Peninsula. 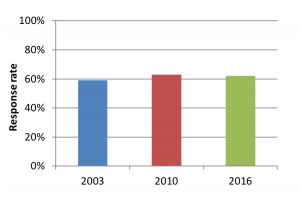 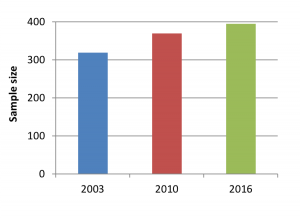 For all three studies, we followed the same methodology: a multi-wave mail survey (Dillman et al. 2009). Each survey included an initial mailing (i.e., cover letter, questionnaire, and return envelope) and postcard reminder to all businesses in the sample, followed by two follow-up mailings to those who hadn’t yet responded. The initial mailing also included a $2 bill that past survey design research indicates improves overall response and actually reduces costs.

Our Initial mailing list for the most recent study were drawn from lists of past respondents, and addresses provided by the Great Lakes Timber Professionals Association, the Wisconsin Department of Natural Resources, and County Forests, and National Forests.