We will be providing updates here regarding the issues surrounding the use of over-the-top dicamba products as they develop.

Growers Can Use Existing Stocks of XtendiMax, Engenia and FeXapan, Says EPA

Last week, a U.S. Court ruling “vacated” the registrations for three dicamba products, sowing confusion over what that meant to farmers wanting to use those products. On June 8, the Environmental Protection Agency issued a response somewhat clearing the air, at least for the short term: growers who already have purchased any of the products can use them up until July 31, 2020. The long-term future for the herbicides remains cloudy.

The EPA has now issued a “cancellation order,” which removes the registration for three dicamba herbicides: XtendiMax, Engenia and FeXapan. Cancelling a registration essentially makes sale and use of a pesticide illegal in the U.S. However, the EPA order will allow use of existing stocks of the three products under specific circumstances. [ EPA Cancellation ]

Perhaps of most concern to growers, the EPA ruling allows use of existing stocks of products already purchased by growers. Those products must be used according to the label directions and can only be used until July 31, 2020. Commercial applicators may sell and distribute their existing stocks for use by July 31.

This is how the situation stands today. There will likely be court challenges from the manufacturers, which could change things down the road.

On June 3, 2020, a three-judge panel of the U.S. Court of Appeals for the Ninth Circuit issued a decision vacating the registrations of three dicamba herbicides: XtendiMax, Engenia and FeXapan. The three products are produced respectively by Bayer, BASF and Corteva. This ruling is throwing some chaos into the just beginning growing season.

The court ruling followed from a lawsuit brought against EPA and Monsanto (now Bayer) in 2017 by a coalition of farming and environmental groups. Those groups include the National Family Farm Coalition, the Center for Food Safety, the Center for Biological Diversity and the Pesticide Action Network. The lawsuit alleged that EPA violated both the Federal Insecticide, Fungicide and Rodenticide Act (FIFRA), as well as the Endangered Species Act (ESA) when it first registered dicamba for use on dicamba-tolerant crops in 2017.

The three dicamba products are used on genetically engineered cotton and soybean plants that have been developed to be resistant to dicamba. The intention is to give growers another tool to control weeds that have developed resistance to glyphosate and other herbicides. Dicamba is a selective herbicide in the benzoic acid family of chemicals used on many broadleaf weeds and woody plants.

In its 56-page ruling, the court found, among other things, that:

In a summary, the court wrote,

“Considering the record as a whole, we conclude that substantial evidence does not support the EPA’s October 31, 2018, decision to grant conditional registrations to XtendiMax, Engenia, and FeXapan for OTT application on DT soybeans and cotton. The EPA found two benefits from the uses, which were amply supported by evidence in the record. But the EPA failed to perform a proper analysis of the risks and resulting costs of the uses.”

The use of the OTT dicamba products have not been without controversy since they came on the market. Many states registered spikes in damage complaints to soybean and cotton fields planted with non-tolerant varieties, other crops and non-crop vegetation. A farmer in Arkansas was even shot and killed in an argument over dicamba damage in 2016. Some estimates indicate that 3.6 million acres of farmland were damaged by the application of dicamba in 2017 alone.

Because of these issues, Arkansas and Missouri banned the use of dicamba in 2017. A peach farmer in Missouri won a multimillion-dollar lawsuit against Monsanto in January after a judge agreed the chemical decimated the farmer’s orchard.

The ruling, of course, throws into doubt whether farmers may legally apply the OTT dicamba products in 2020. Millions of acres of fields have already been planted, or seed bought, in dicamba-tolerant soybeans and cotton.

In its ruling, the court did acknowledge what its decision might portend for farmers, writing:

“We acknowledge the difficulties these growers may have in finding effective and legal herbicides to protect their DT crops if we grant vacatur [vacating the registrations]. They have been placed in this situation through no fault of their own. However, the absence of substantial evidence to support the EPA’s decision compels us to vacate the registrations.” 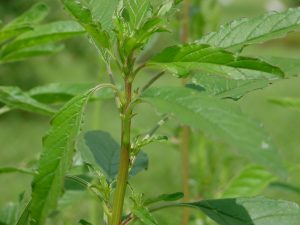 These product and others are being used in the control of difficult herbicide resistant weeds such as waterhemp, Palmer amaranth and giant ragweed.

Bayer has already announced it will challenge the ruling and other legal challenges are likely to follow from other companies and groups. The PAT program will keep you up to date as things develop.