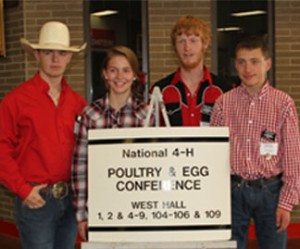 The Columbia County Avian Bowl Team won the State Avian Bowl in September and advanced to the National 4-H Avian Bowl.  The team consisted of Chance Richards, Katelyn Peckham, Chase Richards and Jake Collins.  The Avian Bowl is a double elimination contest for state teams held during the National 4H Egg and Poultry Convention in Louisville, Kentucky (November 14,15, 2012). Contestants must have comprehensive knowledge of several species of poultry, food safety, physiology, nutrition, eggs, and other related subjects. This was the very first time Columbia County had a team participate at the National 4H Egg and Poultry Convention and compete in the Avian Bowl.

The team put in a lot of hours of studying for the State competition and a lot more for the National competition. The first part of the competition was a written exam that assisted the judges in ranking the teams.  The Columbia County team was in the very first match, which was very challenging because both teams were very nervous.  With a very close loss in the first match, the team went on to win three in a row and lost the last round only by 5 points (which is one question), giving the team 6th place in the Nation.

Over all, the team had an experience to remember and came away with more knowledge than they started.  The team would like to thank all the companies and organizations that supported us.