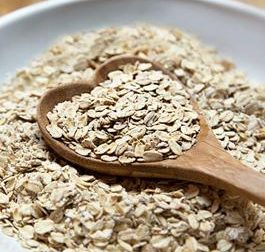 We know that eating raw or uncooked flour isn’t recommended; what about the safety of consuming raw oatmeal? The answer lies in how flour is milled and how oats are processed – the two processes are really quite different. How is flour made? Flour is a finely ground powder prepared from grain or other starchy plant foods. Although flour can be made from a wide variety of plants, the vast majority is made from wheat. Dough made from wheat flour is particularly well suited to baking bread because it contains a large amount of gluten, a substance composed of strong, elastic proteins. The gluten forms a network throughout the dough, trapping the gases which are formed by yeast, baking powder, or other leavening agents. This causes the dough to rise, resulting in light, soft bread and other baked goods.

In the milling process, harvested wheat that arrives as the mill is first sorted and sifted to remove extraneous matter such as small stones or pieces of straw. Before grinding, wheat is blended to make sure the final flour will have the right characteristics, such as the right protein and moisture content. Wheat kernels ready for grinding are cracked and then moved between a series of rollers that separate the wheat from the bran and grind the wheat (endosperm) into finer and finer particles to create flour!  Small amounts of bleaching agents and oxidizing agents are usually added to the flour after milling. Vitamins and minerals are added as required by law to produce enriched flour. When making self-rising flour, leavening agents and salt are added. The flour may be matured/held for one to two months before being shipped to market. A short video which shows the inside of a flour milling operation is here.

How is oatmeal made?   Rolled oats are traditionally oat groats which have been dehusked and then steamed, before being rolled into flat flakes under heavy rollers (rolled oats!) The oat flakes are toasted to remove moisture and make the oats shelf stable. Steel cut oats are produced by cutting the whole groats into smaller pieces. Steel cut oats are not always steamed and flaked, so they may cook a lot slower than more traditional rolled oats. Rolled oats are the traditional forms of oatmeal that we see in the grocery store. Instant or quick-cooking oatmeal has been cooked/steamed longer before flaking and drying so it absorbs water

rapidly and cooks more quickly.
So is it safe to eat ‘raw’ oatmeal? The answer is ‘yes’ for traditional rolled oats you find in large paperboard canisters in the grocery store. Rolled oats have been steamed and heated in processing; steps that destroy pathogens and help to ensure safety. Thanks to Liliana Ramirez (Brown County) for asking this question and stay food-safe! Barb