This will be a series of posts that will discuss some basic information about beef cattle production that would apply to anyone raising beef. The first post in the series will focus on the ruminant digestive system.   The unique digestive system of cattle allows them to digest feeds other livestock cannot, however it is also responsible for reduced feed efficiency compared to other livestock species such as poultry or swine.  In order to understand how we may improve feed efficiency and reduce feed costs, it is important to understand how the digestive system works.

What are these compartments and what do they do? 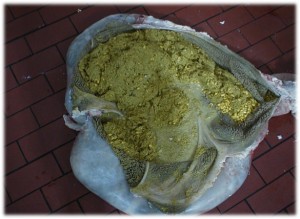 RUMEN (picture 1):  This is the first  compartment of the cattle’s stomach and where fermentation occurs, which allows for the digestion of fiber and other feeds.   This is the largest compartment of the stomach and can hold up to 50 gallons of digested feed.  It is not the cow that digests the feed but the bacteria in the rumen, which does the most of this work.  The rumen contains billion bacteria and more specially, 1 mL of rumen fluid contains 10-50 billion microbes and over 1 million protozoa.  These bacteria attach to the feed particles to digest the feed.  So one simple way to improve digestibility and energy value of feeds is to increase surface area of the feed through processing.

The microbes in the rumen digest cellulose and hemicellulose (i.e. fiber); produce a high quality protein,  volatile fatty acids (VFA’s), and B vitamins; and detoxify toxic compounds.  One of the main by-products of fermentation are VFA’s and these compounds are absorbed through the rumen wall and used as energy by the animal.   Protein, which is digested in the rumen (digestible intake protein= DIP) is used to support microbial growth and functions.   The bacteria will also supply enough B-vitamins to meet the needs of cattle, therefore supplementation of these vitamins are not usually required.  The bacteria will also break down the lipids (fat) into glycerol  to produce VFA’s and fatty acids.  The fatty acids will not be absorbed by the rumen but later down the line in the small intestine.   Unsaturated fatty acids are toxic to rumen bacteria, and the rumen can only tolerate a certain level of unsaturated acids.  The unsaturated fatty acids can be converted to non-toxic fatty acids such as conjugated linoleic acid (CLA), however if too much fat is fed, the bacteria will be overwhelmed and reduce fiber digestibility. 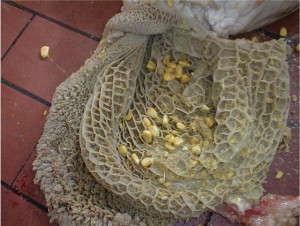 RETICULUM (picture 2):  This compartment is attached to the rumen and has a honeycomb structure to its wall.  The main function of this compartment is to trap large feed particles.  First to make sure they don’t enter the next section of the stomach before they are digested and second to collect for additional rumination.   These particles are then regurgitated, re-chewed, salvia added and then re-swallowed (otherwise known as chewing their cud).  Saliva is important to the rumen as it functions as a buffer.  And a cow will produce 25-40 gallons of saliva per day.  This system has allowed cattle to eat forage rapidly and then store later for digestion.

OMASUM (picture 3):  This compartment acts like a filter.  The rumen is 80% water and cattle are required to drink 35-40 gallons of water a day, mainly to maintain the rumen environment.  The many folds of the omasum serve to squeeze out the water from the feed, so that the majority of the water doesn’t ‘escape’ into the rest of the digestive tract and remains in the rumen. 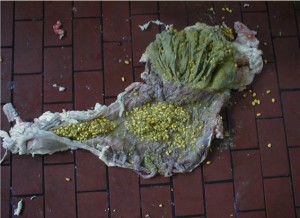 Picture 3. Omasum (upper half) and Abomasum (lower half)

ABOMASUM (picture 3):  The final compartment of the stomach is the abomasum.  This compartment is similar to our stomachs and has a low pH and enzymes to digest the proteins in the feed.   Microbial protein plus undigestible intake protein (e.g. by-pass protein) from the feed is broken down and these amino acids absorbed by the animal in the small intestine.  The nutrients presented to the cow at this point are very different than the feed which entered the rumen.

Because of the ruminant digestive system, the visceral (digestive) organ mass is a much greater percentage of body weight than monogastrics.  This results in more energy required to maintain the digestive system and this the primary reasons for the difference in feed efficiency between these species.  On a forage-based diet the digestive system required 40-50% of daily energy intake and 30-40% of crude protein intake in order to maintain it.  One advantage of feeding grain verses forage is these organs will actually reduce in size and nutrient demands, therefore allowing more nutrients to be available to the animal for growth and other functions.

The ruminant digestive system has allowed the production of meat and milk from forages, thus allowing us to use feeds and land not suited for other food production.  In the process of ruminal fermentation, nutrients produced such as B-vitamins and CLA, also provide us food products which contain nutrients essential to our diet.  I hope you can join me in appreciating this amazing process and digestive system as well as in understanding why certain production practices allows us to more efficiently feed cattle.