Habit 2. of Stephen Covey’s “7 Habits of Highly Effective People” is “Begin with the end in mind.”

“What does that have to do with feeder calves?” you may wonder.

Ever increasing costs of feeder calves and feed have greatly influenced the margins on finishing cattle operations.  With narrow profit margins and high input costs is does not take many problems for things to go from good, to bad, to worse in a hurry.

In response to current economics, feeder calf buyers are looking for well-prepared calves with all the traits and management behind them to minimize the risk of health and other related problems. Documentation is a critical step in  being able to convey this information to potential buyers. A great way to start the process is to start with this year’s set of feeder calves as they hit the ground, and use Steven Covey’s Habit number two, “Begin with the end in mind”.   Keeping this phrase in mind may be in order to help feeder calf producers implement the practices that will add value to their calf crop and to correctly document these practices.

A feedyard is really only concerned with two costs that influence their profitability – the price of grain and the price of incoming feeder cattle.

Due to high grain prices, feedyards have been exercising their ability to influence the price they will pay for feeder cattle coming into their yards. This in turn affects revenue and profitability on cow/calf operations.

The USDA 2011 feedlot study
A tremendous set of timely and valuable data is currently being released by USDA as a result of the most recent National Animal Health Monitoring System (NAHMS) study conducted during 2011.

This study involved in-depth interviews of cattle feedyard operators from the major cattle feeding states across the U.S. and was a followup to a similar study conducted in 1999.

A key focus of the 2011 study was to evaluate the importance of pre-arrival management practices on cattle arriving to a feedyard.

Since an animal’s management and health history greatly influence its feedyard performance, researchers hoped to determine if feedyards have changed their focus on finding out how cattle have been cared for before being started on feed. 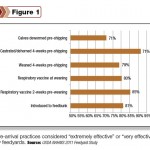 When rating the effectiveness of each management practice, 92 percent of respondents indicated that castrating/dehorning at least four weeks prior to shipping was the most important practice that could be done prior to feedyard arrival.

These data clearly indicate that the vast majority of feedyard operators place a large amount of inherent value on these practices and their ability to lessen health problems in newly arriving cattle.

As a result, cow/calf producers should evaluate options for implementing each of these management strategies on their operations in order to immediately add value to their calf crop.

Availability of pre-arrival information
Even though feedyards place great importance on pre-arrival practices such as vaccinating, weaning and bunk training, many cow/calf producers have limited options for relaying information on to feedyards that these practices have been completed.

In fact, recently released results of the 2011 National Beef Quality Audit indicate that there is a tremendous need for enhanced information flow up and down the entire U.S. beef supply chain.

This includes sharing information about how cattle are produced with consumers, as well as sharing background information on feeder cattle arriving at feedyards from cow/calf operations.

During the past two NAHMS feedyard studies (1999 and 2011), feedyards were asked how often they have access to pre-arrival information on cattle. 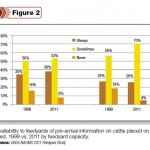 Ranges are due to feedyard capacity classifications (as seen in Figure 2).

However, the percent of feedyards that “sometimes” had access to pre-arrival information increased dramatically, but only among larger feedyards with 8,000 head or greater capacity – an increase from 56 percent in 1999 to 70 percent in 2011.

Historically in the beef industry, several obstacles have prevented the free movement of data across sectors, especially from cow/calf producers to feedyards.

This is probably due to the large percentage of cattle sold via auction markets and the fact that information on small groups of cattle (particularly those smaller than truckload lots of approximately 50,000 pounds) is very challenging to pass down the supply chain.

Further, this prevents clear “values” associated with pre-arrival information to be passed back to cow/calf producers.

And, as suggested by USDA in results from its study, costs associated with having a system to pass information between segments may actually exceed the information’s value to feedyards.

This is an increase of 10 percentage points compared to 1999 results (Figure 3). 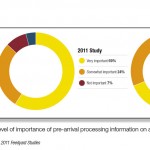 In contrast, from 1999 to 2011 the other response options of “somewhat important” and “not important” dropped by 4 and 2 percentage points, respectively.

It should be noted that the response option “information not available” was only offered during the 1999 study.

Regardless, these results clearly indicate that feedyards place great value on pre-arrival information. Unfortunately, an actual dollar value associated with that information has not been determined.

1. Cow/calf producers should take immediate action to satisfy increasing feedyard demand for calves that have been castrated, dehorned and weaned at least four weeks or more prior to shipping; given respiratory vaccines (ideally at least two weeks pre-weaning); introduced to a feed bunk and dewormed.

Unfortunately, actual financial premiums that are available for calves meeting these specifications have not been well documented and are not consistently available for cow/calf producers in all markets.

However, as the industry continues to move toward improved health status in the feedyard, at some point these items will become required in the marketplace.

2. Feedyards place tremendous value on pre-arrival processing information for cattle – but apparently they don’t necessarily have complete access to such information since the industry lacks infrastructure to allow for the free flow of accurate information.

The USDA NAHMS report suggests that the beef production industry should focus on increasing the percentage of feedyards that “always” have access to pre-arrival information.

Accomplishing this will require better communication among industry sectors and development of a uniform method to transfer data at the time of sale.

Ultimately, focusing on these points will help improve the health and performance of feedyard cattle. And, in turn, this will improve the beef industry’s profitability and positively impact end product quality and consistency.