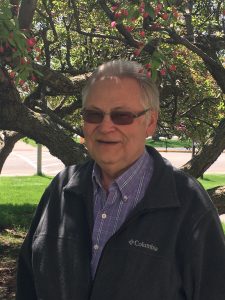 Byron Hacker grew up in Calumet County 4-H. He became a volunteer when his children joined and now 29 years later, he is still serving.

Byron is passionate about plant and soil science projects, and has taught workshops on the local, state and national levels, including Fall Forum and the Wisconsin 4-H and Youth Conference. He has recruited youth to compete at the State 4-H Plant Science Day, with members progressing to national competitions, where he was their chaperone. He is the Wisconsin advisor to the National Junior Horticulture Association and serves on the State Plant and Soil Science Committee.

When asked why he volunteers, Byron replied “somebody has to do it.” He believes that if youth don’t have mentors in areas that interest them, they will lose interest. While judging at a county fair, Byron met a youth passionate about perennials. With encouragement, that youth attend the NJHA convention and was later elected to a national office.

Byron spent his career as a social worker for Calumet County. He has mentored many youth, and made a difference in their lives because he truly cares and wants to see them succeed. That same caring and loving attitude extends to his 4-H work.

A humble person, Byron doesn’t volunteer for the recognition, but in 1998 he received Calumet County 4-H’s Special Leadership recognition award. In 2017 he was Calumet County’s 4-H Lifetime Volunteer. The Calumet County Fair named him Fair Person of the Year in 2016 for his dedication as superintendent.