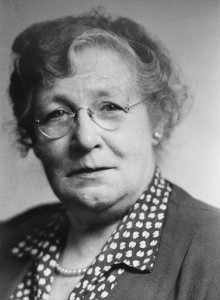 On October 30, 1914, Thomas L. Bewick traveled from Madison to the Hatch home in Linn Township, Walworth County, to organize the first Wisconsin 4-H Club of seven boys and girls. Mrs. Hatch served as the volunteer leader of Wisconsin’s first 4-H club from 1914-1932, when the club’s membership was 81 young people.

May was born and raised in Chicago, and spent summers at Geneva Lake where she met and married Hobart Hatch. They made their home on the Hatch family farm. May was left a widow when her family of five was still young. All of her children were active 4-H members.

She received honorary recognition at one of the eight 1943 Farm and Home Week banquets held around the state. The recognition reads:

“The University of Wisconsin recognizing the eminent services of Mrs. May Hatch, who has developed social values in rural life; who organized the first 4-H club in Wisconsin; and who is highly and widely esteemed for her work with rural youth, present this testimonial on the recommendation of the faculty of the College of Agriculture and with the approval of the regents of the University.”