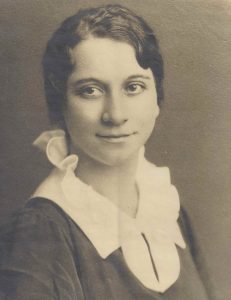 In 1919, at the age of nine Josephine Taylor’s father gave her a Shropshire ewe lamb which she showed at the local fair. In 1920, Josephine joined 4-H, took out a $50 loan to buy a purebred Poland China gilt, showing at the Walworth County Fair where she became the first girl to exhibit livestock, as well as win 1st prize, Grand Champion of the Junior Show, 1st in the Open Show, and 1st prize in Madison at the State Show. So began Josephine’s career as a 4-H competitor.

In her eleven years as a club member, Josephine completed 48 projects including pig, sheep, calf, canning, sewing, baking, gardening and Junior Leader. During this time she also received recognition for her 4-H work and attended state and national conferences.

In 1950 Josephine married William Hawthorne, another dedicated 4-H member with a passion for gardening. They had a successful business growing and selling flowers from their own greenhouse.