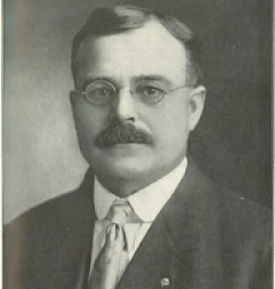 Ransom Asa Moore, born on June 5, 1861, grew up near Kewaunee. After an accident left him in need of a less physical career, Moore started teaching. In 1889, he was elected as Kewaunee County’s Superintendent of Schools. While in that role, people expressed concern with the lack of quality agricultural projects at the county fair; the county board asked Moore to address this situation.

He worked with teachers to grow and make things to exhibit at the fair known as “Young People’s Contest Clubs” which had exhibits from every county school. Moore was in contact with the president of the University of Wisconsin, recommending students to the University. Shortly, Moore was recruited to oversee the school’s short course program.