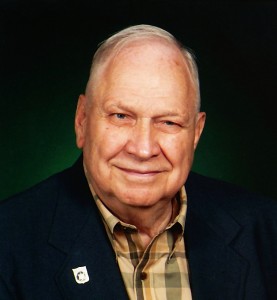 Russell was the Iowa County 4-H Agent from February 1951 through 1982. Four clubs that Russell formed recently celebrated 50-year anniversaries. Throughout his career, he worked with judging teams, assisted with animal exhibits at the Wisconsin State Fair, partnered with 4-H leaders, judged record books, and had an instrumental role at the Iowa County Fair. Russell received the Distinguished Service Award from the Wisconsin Association of Extension 4-H Agents in 1964.

A 4-H alum of Russell’s who is a retired Associate Dean at Cornell University had these kind words to share: “He was youth-centered and focused on assets long before the Search Institute helped society to recognize their importance. He recognized the value of informal education complementing what was learned in the classroom.”

After retirement, he continued to serve youth as a county fair judge until 2011. He still lives in Dodgeville where his heart is still with 4-H and Iowa County youth.