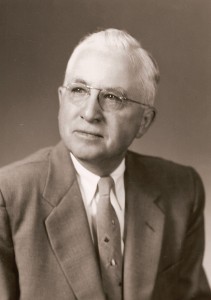 At the end of WW I, the Pierce County Board, in cooperation of the College of Agriculture and USDA, appointed H.G. Seyforth as first Extension Agent, a position he held for 37 years until his retirement in 1957.

The first 4-H club members enrolled in the spring of 1921. These members were organized into project clubs with the most popular being corn, potato, calf, poultry and sewing. In September 1921, the first 4-H projects were presented at the Pierce County Fair. For the first five years, H.G. Seyforth was “the leader,” working almost entirely alone. He visited many of the 100 rural schools. Most of these schools had to be visited in the spring as the roads were not kept open for winter driving.

During the Depression, the County Board discussed discontinuing his position. A Vote Seyforth rally was held during 4-H Achievement Day. Due to stories of how 4-H helped improve lives on the farm, the Board voted to keep Mr. Seyforth. In 1954, the H.G. Seyforth Outstanding Leader Award was created and is still given annually to 4-H volunteer leaders in “Sey’s” honor.