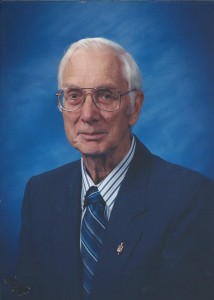 Gale VandeBerg first experienced Extension as a 4-H member in Clark County. He studied at UW-Madison, and then taught high school for two years before taking an assistant county agent position in Outagamie County. This led him to working with 4-H youth.

Continually learning and teaching was Gale’s life calling. His Master’s degree from Cornell is in extension education. While working on his Ph.D. at UW-Madison, he taught in the Department of Agricultural and Extension Education.

On completion of his degree, he was appointed associate professor in the National Agricultural Extension Center for Advanced Study. In 1960 he was appointed as assistant director of Cooperative Extension. He served on the committee to plan for the Extension merger in 1965. After the UW System merger in 1973, he became assistant chancellor and director of Cooperative Extension. His national contributions were recognized with the Epsilon Sigma Phi Ruby Award in 1982.

Gale was often the first one in a position as his career was during a years of growth, prosperity, and innovation.