Total Latino Population and its Growth over Time 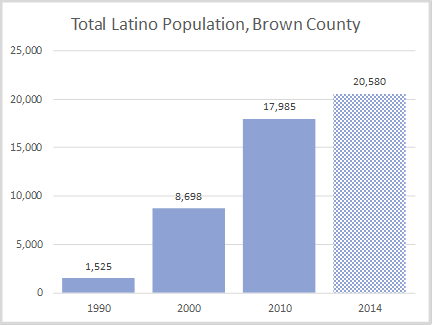 Based on the 2010 – 2014 American Community Survey (ACS) estimates, one in eight residents of Green Bay are of Latino origin. More than two-thirds of the county’s Latinos live in the city, with most of the balance in seven other municipalities.

¹Five-year ACS data for 2010-2014 is the only source of municipality-level estimates more recent than the 2010 Census for many demographic, social, and economic characteristics. Because of margins of error, caution should be exercised in drawing conclusions from the ACS for small areas. 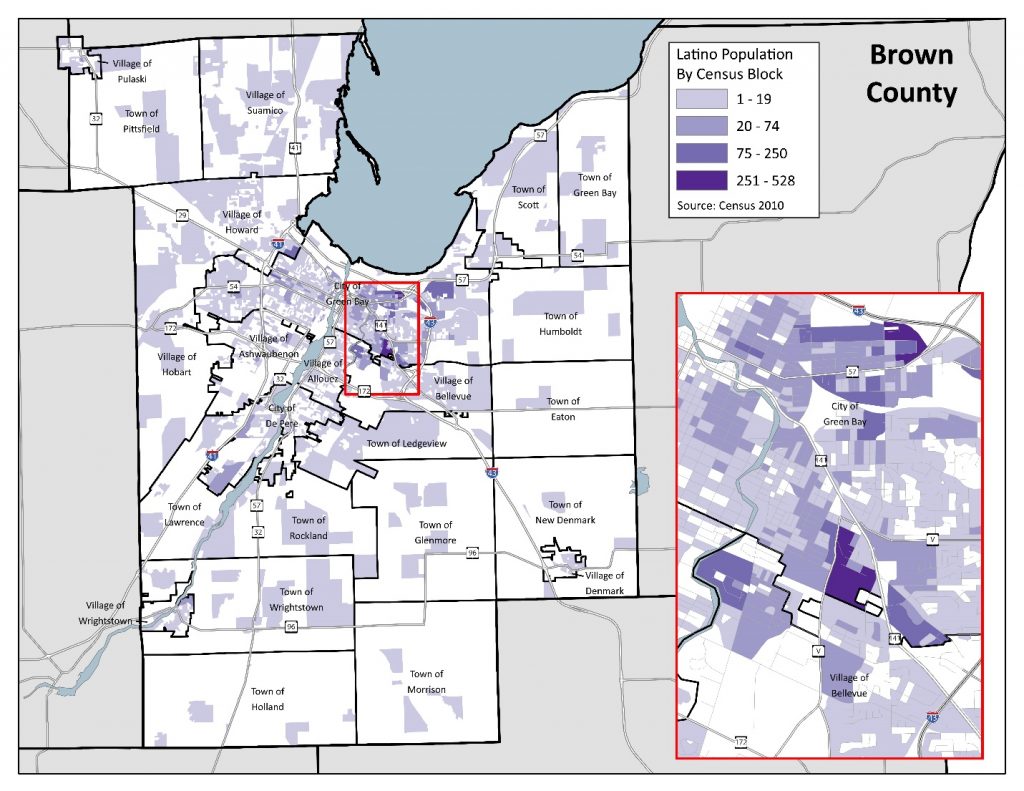 Block-level maps, available only from the decennial Census, reflect the higher numbers of Latinos in the areas east of downtown Green Bay; the southeast part of the city near U.S. Highway 141 and County V; and east of the I-43/Highway 57 interchange. The map also shows scattered populations of Latinos through most of the other municipalities in Brown County. 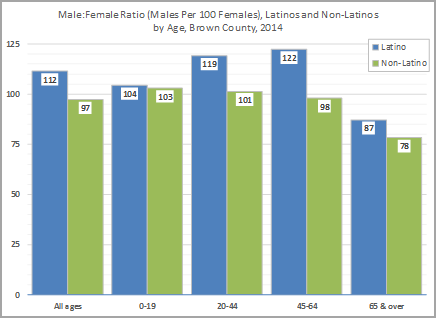 The male:female ratios of Latinos are higher than the corresponding ones for non-Latinos. For all ages in Brown County the ratio of Latino males to females is 112 to 100; among non-Latinos, there are fewer men than women. High male-to-female ratios are particularly evident in the prime working age categories of 20-44 and 45-64.

The Latino population tends to live in family households at rates greater than the non-Latino population. In Brown County, nearly one-half of Latino households are married couples with children, and another nearly one-quarter are single parents with children. In contrast, non-Latino family households tend primarily to be made up of married couples without children in the home (influenced by the age pattern: many of these couples are likely “empty nesters” whose children have grown and moved away) and single people living alone. 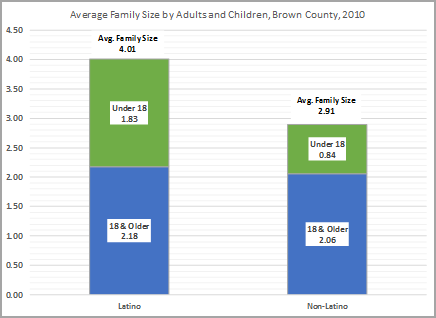 Because more Latinos live in family arrangements and, more often than not, have children in their households, their average household and family sizes are larger than those of non-Latinos. In Brown County, the average Latino-headed family has just over 4 members, while non-Latino families average about 2.9.

Immigration and Countries of Origin

In Brown County, two of every five Latino residents were born in Wisconsin. A nearly equal proportion are estimated to have been born in foreign countries. (At the state level, 64% of Latinos were born in the U.S.—45% specifically in Wisconsin—and 30% were foreign-born.)

*Includes Latinos born in Puerto Rico, and those born in other countries who have at least one U.S. parent

Nearly three of four Latinos in Brown County identify Mexico as their country of heritage or origin, and ten percent report Puerto Rico. Other Central and South American countries and some Caribbean nations (e.g., Cuba, the Dominican Republic) account for the balance. 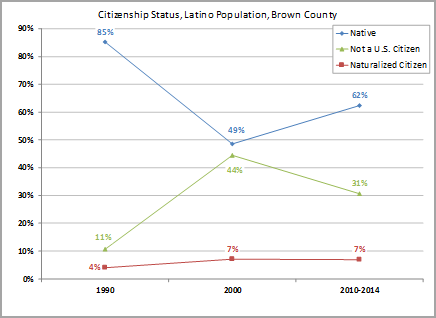 With regard to citizenship status across the past 25 years, immigration to Brown County during the 1990s was robust, producing a sharp rise in the number and percent¬age of non-citizen Latinos, and a consequent decline in the percentage of native citizen Latinos (even though numeric increases were strong). However, over the past 15 years the percentage of native citizens rebounded, with a resulting decline in the share of non-citizens.

In Brown County, one-fourth of Latino residents reported speaking only English at home, while nearly three-fourths report speaking Spanish as their primary home language.
Among those who use Spanish at home, seven out of ten reported also speaking English “very well” or “well.”

Note: Universe for this measure is population 5 years of age and older 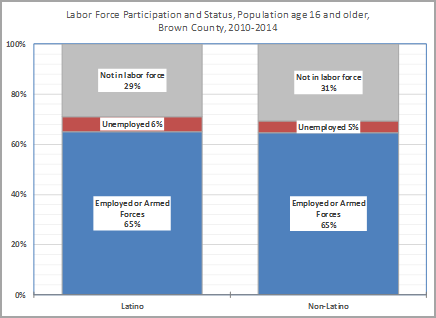 In Brown County, more than four out of ten Latinos reported being employed in manufacturing in the latter part of the last decade. Statewide, the percent in manufacturing was only 25%, with higher shares in the education, health care and social assistance (14%) and entertainment, recreation, accommodation and food services (15%) categories.

²The years 2006 – 2010 are the most recent period for which occupation-by-industry estimates are available. 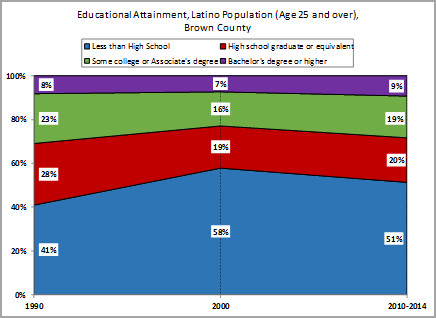 Over the past 25 years, the educational attainment of Latinos in Brown County has been reflective of the pattern of recent arrivals. Brown County’s Latino population nearly quintupled from 1990 to 2000; many were foreign-born non-citizens (see graph in “Immigration and Countries of Origin” section earlier). Consequently, the share of those who had less than a high school education rose from 41% in 1990 to 58% in 2000. In the past 15 years, gains in Brown County’s Latino population have been robust but more tempered than the 1990s. The proportion of Latinos without a high school diploma has fallen to 51%, and other higher categories have risen.

In terms of public school enrollments, the number of Latino students nearly doubled at the elementary level, more than doubled in the middle schools, and rose 150% in the high schools from 2005 to 2015. These increases helped to boost elementary enrollment and to sustain overall totals at the middle and high school levels as non-Latino enrollment declined. 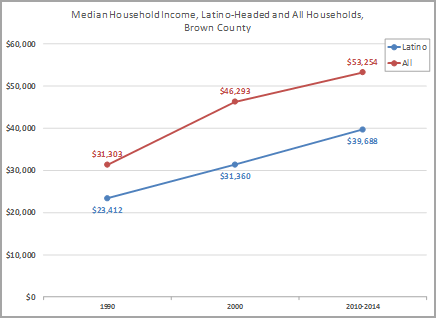 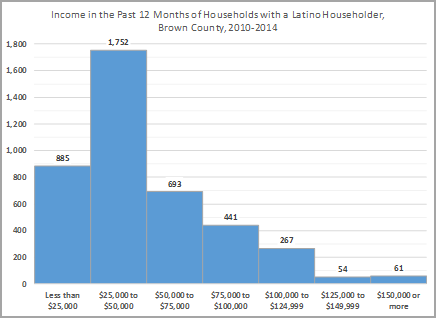 Income in the Past 12 months of Households with a Latino Householder, Brown County, 2010-2014