Many factors affect the profitability of businesses. Understanding which do and which don’t have implications how we structure public policy and how wood-using industries make procurement decisions.  Wisconsin logging businesses rated the importance of 11 factors that could affect their profitability during their 2003 and 2010 production years.  Respondents in both surveys indicated that all factors were either “somewhat important” or “very important.” 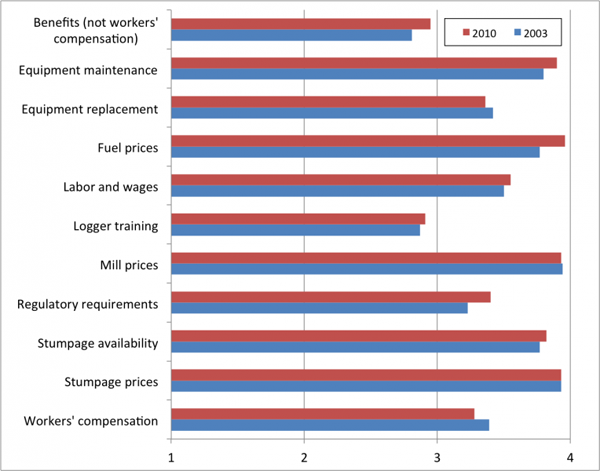 In 2010 the dominant factor affecting profitability was fuel prices, while this factor ranked 5th in the 2003 production year.  One possible explanation for this is that diesel prices over the period also went up. The U.S. Energy Information Administration (EIA) reported Midwest annual No. 2 Diesel Retail Prices averaged $2.964/gallon in 2010 and $1.488/gallon in 2003 (both inflation-adjusted), indicating that prices for fuel increased by 50% over the period.

In reviewing the chart above, three grouping are evident across both the 2003 and 2010 survey. Fuel prices, mill prices, equipment maintenance, stumpage availability, and stumpage prices all approach an average score of 4, indicating they are very important. A second grouping appears around 3.5 and includes equipment maintenance, labor and wages, regulatory requirements, and workers’ compensation. Of lesser importance (scores < 3, i.e., “somewhat important”) are benefits and logger training.
As part of the 2010 questionnaire, respondents were asked to identify which factors were most important to remaining profitable. Respondents could identify their first, second, third, and fourth most important. As might be expected from the previous chart, fuel prices were identified most often in the top four. Mill prices and stumpage prices followed closely behind. However, mill prices and stumpage prices received the highest portion of responses as either first or second most important. This is same as 2003. Additional comparisons to 2003 are not possible, as respondent to the 2003 survey could only select their first and second most important. (We added the third and fourth options in 2010 to allow for a fuller understanding.) 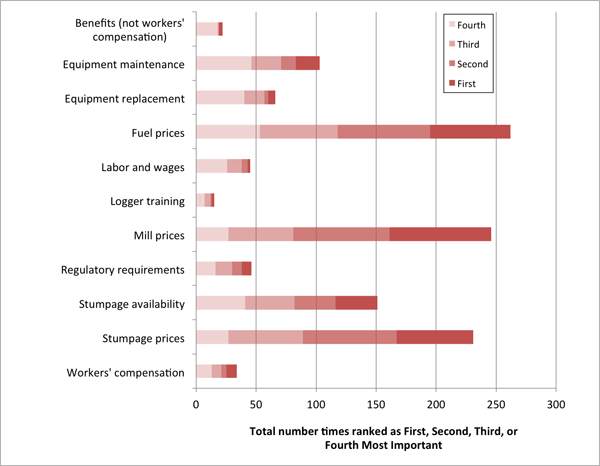