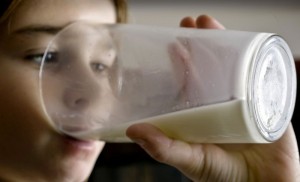 Milk and milk products provide a wealth of nutrition benefits. But milk that has not been pasteurized can harbor dangerous microorganisms that can pose serious health risks to you and your family if consumed raw.

According to the Centers for Disease Control and Prevention (CDC), from 1993 through 2012, there were 127 outbreaks linked to raw milk or raw milk products like ice cream, soft cheese, or yogurt. They resulted in 1,909 illnesses and 144 hospitalizations. The CDC points out that most foodborne illnesses are not a part of recognized outbreaks, and for every illness reported, many others occur. Perhaps more than at any other time, it’s important to prevent any illness that may result in a hospitalization or further strain the health care system.

Raw milk can come from cows, sheep, and goats — or any other animal. Raw milk can carry dangerous bacteria such as Salmonella, E. coli, Listeria, Campylobacter, and others that cause foodborne illness, often called “food poisoning.” These bacteria can seriously injure the health of anyone who drinks raw milk or eats products made from raw milk. However, the bacteria in raw milk can be especially dangerous to people with weakened immune systems (such as transplant patients and individuals with HIV/AIDS, cancer, and diabetes), children, older adults, and pregnant women.

What are the risks associated with drinking unpasteurized (raw) milk? While it is possible to get foodborne illnesses from many different foods, raw milk is one of the riskiest of all. Getting sick from raw milk can mean many days of diarrhea, stomach cramping, and vomiting. Some people who drank raw milk have developed severe or even life-threatening diseases, including Guillain-Barré syndrome, which can cause paralysis, and hemolytic uremic syndrome, which can result in kidney failure, stroke, and even death.

Here are some things you should know:

But aren’t raw or natural foods better than processed foods? Many people believe that foods with little to no processing are better for their health. Many people also believe that small, local farms are better sources of healthy food. However, some types of processing are needed to protect health. One type of processing happens when we cook raw meat, poultry, and fish to make them safe to eat. Similarly, when milk is pasteurized, it is made safe by heating it just long enough to kill disease-causing germs. Most nutrients remain in milk after it is pasteurized.  And the enzymes that may be destroyed on pasteurization are not enzymes that humans can absorb and use.

Is raw milk a good source of beneficial bacteria? Raw milk contains bacteria, and some of them can be harmful. So, if you’re thinking about consuming raw milk because you believe it is a good source of beneficial bacteria, you need to know that you may instead get sick from the harmful bacteria. If you think that certain types of bacteria may be beneficial to your health, consider getting them from foods that don’t involve such a high risk. For example, pasteurized fermented foods, such as yogurt and kefir, contain bacteria that are safe to eat.

I know people who have been drinking raw milk for years, and they never got sick. Why is that? The presence of germs in raw milk is unpredictable. People can drink it for a long time without getting sick, and then get sick if their milk is contaminated.

Subscribe to the blog to receive food safety and food preserving updates.