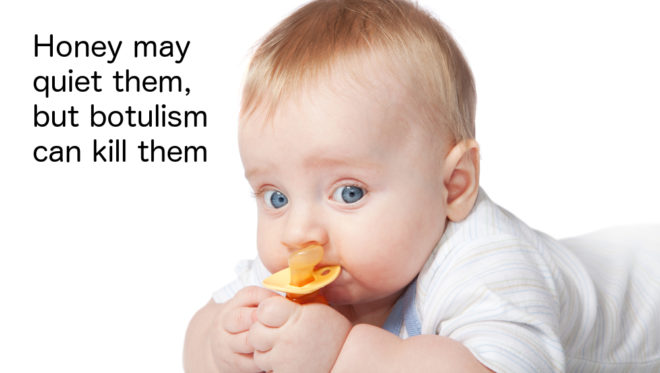 Last year health officials reported that four infants in Texas developed botulism poisoning after consuming honey. The children, all less than a year old, had all been given pacifiers containing honey before they became sick. All four babies had to be admitted to hospitals for life-saving treatment. Botulism poisoning attacks the nervous system and often paralyzes muscles used to breath, causing death quickly if the patient does not receive immediate medical attention.

What is the risk? Honey can contain the spores of Clostridium botulinum, an organism that produces a potent neurotoxin known to cause severe illness in infants. Infant botulism occurs when C. botulinum spores in food, dust, or other materials are inhaled or ingested and germinate in the gut of infants who have not yet developed mature intestinal flora. For this reason, parents are advised not to feed honey — raw or otherwise — to children younger than 12 months old. Once the gut matures and a high-acid environment exists in the stomach, the risk of C. botulinum drops; adults and older children do not run the risk of developing botulism poisoning from honey.

Infants with botulism poisoning can have symptoms that often start with constipation and may include poor feeding and/or weak sucking, weakness, drooping eyelids, loss of head control and difficulty breathing. Severity can range from mild illness with gradual onset to paralysis, respiratory failure, and death. Remember to protect children and stay food-safe. Barb