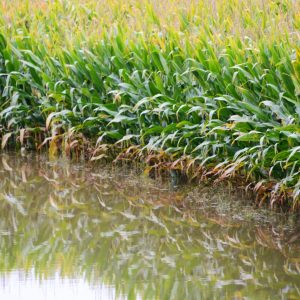 Recent rains have caused flooding and ponding in many cornfields. Growers are concerned about corn growth and development and any yield effects that might occur from short periods of flooding. Many crop fields were completely destroyed, while others were left with varying degrees of damage. Before making any decisions about your fields, you should document and report any crop damage to your local U.S. Department of Agriculture Farm Service Agency (USDA FSA) office, your crop insurance agent and the Wisconsin Department of Agriculture, Trade and Consumer Protection You are strongly encouraged to take ‘time-dated’ photos of any damage. Such information may be critical in federal emergency determinations and your eligibility for these programs.

The extent to which flooding injures corn is determined by several factors including: 1) timing of flooding during the life cycle of corn, 2) frequency and duration of flooding, and 3) air-soil temperatures during flooding (Belford et al., 1985).

Flooding at any time when the growing point is below the water level can kill the corn plant in a few days, especially if temperatures are high. Growing point tissues are depleted of oxygen. After a storm event we need to be patient and let plants respond. Plants can usually survive short periods of flooding of less than 48 hours (Wenkert et al., 1981).

Respiration is the plant physiological process most sensitive to flooding. Flooding reduces the exchange of air (oxygen) between soil and atmosphere eventually leading to decreased total root volume, less transport of water and nutrients through the roots to the shoot, and formation of sulfides and butyric acid by microorganisms that are toxic compounds to plants (Wesseling, 1974).

Soils contain pores filled with gas and/or water. The two main gases important for respiration are oxygen and carbon dioxide. The pathway for oxygen into the plant is from the atmosphere through soil pores to a thin water film surrounding plant root hairs. It is relatively easy for oxygen to diffuse into soil when pores are filled by air, but oxygen does not easily diffuse in water so the main constraint to oxygen movement is the thin water film surrounding root hairs. This boundary is magnified in flood/pond conditions. Carbon dioxide rarely accumulates to toxic levels in soil (Wesseling, 1974).

All biological processes are influenced by temperature (Wesseling, 1974). Wet soils have a large heat capacity and considerable amounts of heat are required to raise their temperature. Thus, usually wet soils are cold and corn growth is slower. Drainage lowers the moisture content of the upper soil layers so air can penetrate more easily to roots, and transport carbon dioxide produced by roots, microbes and chemical reactions to the atmosphere. Lowering soil moisture content also leads to higher soil temperatures and faster growth.

The growing point of corn is metabolically active and is near or below the soil surface prior to V6 (6 visible leaf collars). Within about 48 hours the oxygen supply in a flooded soil is depleted (Purvis and Williamson, 1972; Fausey and McDonald, 1985). Without oxygen, the growing point cannot respire and critical functions are impaired. If temperatures are warm during flooding (greater than 77 degrees F) plants may not survive 24-hours. Cooler temperatures prolong survival. If flooding in corn is less than 48 hours, crop injury should be limited.

To confirm plant survival, check the color of the growing point. It should be white to cream colored, while a darkening and/or softening usually precedes plant death. Also look for new leaf growth 3 to 5 days after water drains from the field. Once the growing point is above the water level, the chances of survival improve greatly.

Things to look for later during the growing season

Even if flooding doesn’t kill plants, it may have a long-term negative impact on crop performance. Excess moisture during the early vegetative stages retards root development (Wenkert et al., 1981). As a result, plants may be subject to greater injury later during a dry summer because root systems are not sufficiently developed to contact available subsoil water.

A considerable amount of oxygen is required in the soil for mineralization of nutrient elements from organic matter by microbes. Oxygen deficiencies reduce microbe activity, decreasing the rate at which ammonium and nitrate are supplied to plants resulting in nitrogen deficiency in waterlogged soils (Wesseling, 1974). Additionally, flooding can reduce the activity of mycorrhizae essential for symbiotic phosphorus uptake (Ellis, 1998). Flooding can also result in losses of nitrogen through denitrification and leaching. Where estimated nitrogen loss is significant in fields not yet tasseling and yield potential is reasonable, corn may respond to additional applied fertilizer.

Mud and sediment caking leaves and stalks could damage plant tissue and allow development of fungal and bacterial diseases not typically seen. Due to early season stress the plant may be predisposed to root and stalk rots later and harvest timing of fields may need to be adjusted accordingly. A disease problem that may become greater due to flooding and cool temperatures is crazy top, a fungus that depends upon saturated soil conditions to infect corn seedlings. With warmer, wet or humid conditions Pythium can reduce stands despite fungicide seed treatments. There is limited hybrid resistance to these diseases and predicting damage is difficult until later in the growing season.

Below are best management guidelines for harvesting, storing, and feeding flooded field and forage crops including corn, hay crops and pasture.

Sampling and Testing for Mycotoxins

The risk of mycotoxin development may increase in crops that have been flooded and covered in silt. Mycotoxins are poisons that are produced by fungi. These toxins can be detrimental to both animal and human health. Mycotoxins can cause problems in production, reproduction and intake problems, as well as possible irreversible damage to cows’ organs, including the liver and kidneys.

Fungi in the ‘Fusarium’ family produce many of the common mycotoxins. The fungi itself is ubiquitous and found in the soil, plant residue and even blown around through air currents. Mycotoxins associated with ‘Fusarium’ are zearalenone, T-2 toxin, fumonisin, and deoxynivalenol, also called DON or vomitoxin. The following are mycotoxin risk levels for dairy cattle, expressed on a total ration, dry-matter basis.

Aflatoxin produced by the fungi Aspergillus, the most serious carcinogen, has been found in high  levels in peanuts, corn, cotton seed, and grain and can contaminate milk. This toxin is a serious problem for human and animal health and can contaminate corn in warmer growing regions.  Aflatoxin requires warm ( 85 oF) and moist conditions. Where fall conditions are cool, aflatoxin is rarely found.

All flooded forages should be tested for mycotoxin after complete fermentation but soon enough  so you have time to obtain feed if it has unacceptable levels. Samples should be taken from the storage facility and the TMR if available. The sampling strategy and frequency will depend on herd health monitoring. Mycotoxin analysis can be completed at many commercial labs.

Take an accurate inventory of your volume and quality of stored forage. Estimate how much feed you will need this winter and whether it is possible to avoid using the flooded forage. Talk to your feed consultant about cost-effective options for replacing lost feed. Right now is the time to make the calculations. If you find you will have to borrow money to buy feed, talk to a banker early.