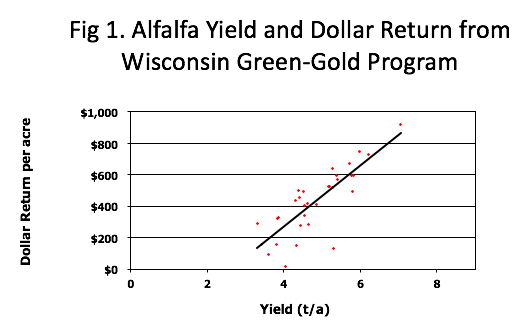 The single factor most affecting profitability of alfalfa is yield. This can be seen in the graph at the right which depicts economic data from the Green-Gold program (a third party verified measured yield and quality program) the Wisconsin Forage council used to run. These data clearly show that profitability was strongly related to yield.

Alfalfa has received some undue criticism for low yield. It is important to remember that the top yields in the Green-Gold program always exceeded 7 tons/acre and often approached 10 tons per acre. High yields are achievable with proper management. What did these farmers do different to get the high yields?

Those farmers who get high yields with alfalfa recognize its importance in the profitability of their farm and treat it well in a timely manner rather than managing and harvesting only when time from other crops and activities permits. I recommend the following seven areas that all farmers should consider if they want high alfalfa yields. 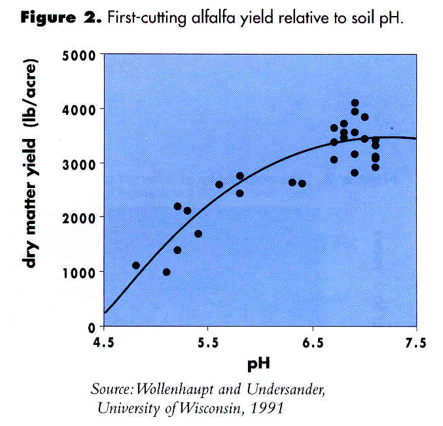 The first thing they pay attention to is soil pH. Soils must be limed to a pH of 6.8 to 7.0 for optimum alfalfa yield. Seventy-five years after having demonstrated the need for lime through research, only slightly more than half the required lime is applied in Wisconsin. Additionally, many farmers do not plan sufficiently to apply the lime sufficiently far in advance of planting to allow the lime to raise the soil pH. Attempting to grow alfalfa with less than optimum pH will restrict growth so that yields are reduced by up to 40%. (note that yields from a new seeding at Lancaster in figure 2.) Additionally, alfalfa growth is reduced with low pH it is also more prone to diseases and, therefore, has shortened stand life.

Second, if we want anything to grow we need to feed it. Alfalfa has nutrient requirements that must be met for good yield. Potash is particularly required in large amounts relative to other crops. Alfalfa requires 58 lbs. of potash per ton of forage produced. Lesser amounts of applied or soil potash will reduce yield. We must also manage levels of boron and sulfur. Sulfur, particularly, is a nutrient that was not lacking in the past and now often needs to be applied for optimal growth.

Thirdly, farmers who grow alfalfa profitably also harvest at the proper time for high quality forage. This is particularly critical on first cutting in the spring when forage quality is changing the most rapidly. On first cutting our scissors clip data has indicated that forage quality is generally changing 5 points of RFV per day as we approach harvest. As this year when soils are wet and spring field work difficult, decisions often must be made between planting another crop or harvesting alfalfa. When making the decision, the following economics should be kept in mind:

When put in these economic terms, the decision should be clear. In terms of quality effect on milk performance of dairy animals the loss is even greater. 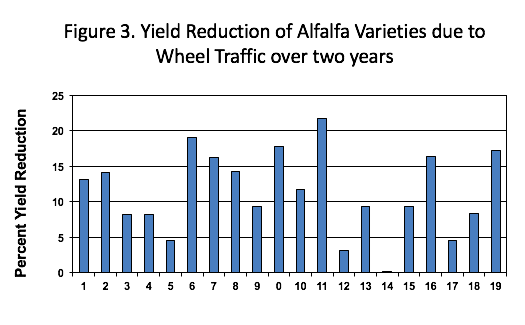 The same economic considerations should be kept in mind when considering whether to cut if rain is threatening. Forage quality will continue to decline while waiting for good weather. In many situations, it may be better to cut alfalfa and take some risk of rain rather than to wait and realize the surety of forage quality decline.

The fourth area farmers should consider to maximize yield is to minimize wheel traffic on the field and select wheel traffic tolerant varieties. We all intuitively known that driving over a plant damages it and compacts the soil, further reducing growth but we have not applied this to consider the associated yield losses to alfalfa. A certain amount of driving over alfalfa is obviously necessary to harvest it. However, we should remember that every trip over the field does some damage and reduces yield.

To minimize yield losses due to wheel traffic we recommend the following: 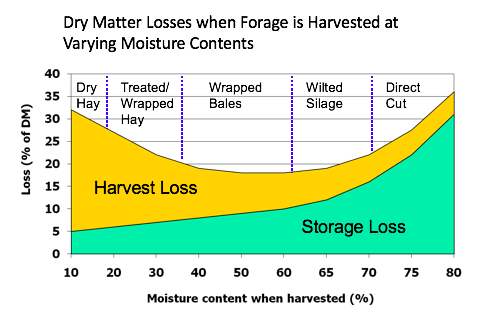 The fifth area for high alfalfa yields is to cut the field as close to the ground as possible to avoid damaging the crowns. Recent data would indicate that approximately 0.5 t/a yield is lost for each inch higher the stand is cut.

The sixth area farmers should pay attention to is minimizing field losses during harvest. This involves a series of practices such as using roller conditioners rather than flail conditioners, raking when hay has at least 40% moisture, turning and moving alfalfa as little as possible prior to harvesting and harvesting hay at the highest moisture content possible to avoid spoilage in storage. The graph at the right indicates that average losses run about 10% for silage and 20 to 25% for hay harvested. However, these losses can easily double if management is poor, causing field dry matters losses of up to 25% for silage and 50% for hay.

The seventh and final major area for yield improvement comes in planning on keeping alfalfa in the field for shorter times. Because of tremendous demands on alfalfa, it is not reasonable to expect stands to last for a long time. Great strides have been made in improving alfalfa stands persistence however yield still tends to decline after the second production year due to damage from wheel traffic, winter and diseases in older stands reduce yield. 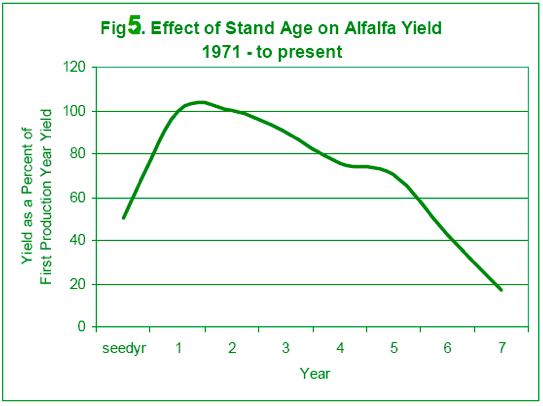 As shown in figure 5, on the average over the last 20 years, yields in the UW alfalfa variety trials have been highest in the first and second production years and then began to decline. This yield decline has averaged 15% in the third production year and almost 30% in the fourth production year. All economic analysis would clearly indicate that it is more profitable to plan on shorter rotations and replant alfalfa fields oftener than to attempt to keep a low yielding field for another year or two. In addition, the cost of production goes up on the older fields with thinner stands because, either lower quality forage is produced due to inclusion of harvested weeds or expense goes up, due to the need for additional herbicide.

In summary, alfalfa can be a high-yielding profitable crop if managed as such. It requires making sure that alfalfa has the soil pH and fertility it needs, harvesting in a timely manner, minimizing wheel traffic, cutting close to the ground, reducing field losses, and turning over stands in a timely manner.