Producing quality dry hay is an ongoing challenge that producers face each year.  Some producers attempt to take the bad weather out of the dry haymaking process by building on-farm hay driers, using hay preservatives at harvest or making additional passes over the field with crimpers and rakes to promote the drying process; all of which add to the cost of production.  Last winter, a Jefferson County producer questioned whether any research had been conducted in Wisconsin with the Super Conditioner manufactured by Circle C from Hermiston, Oregon.   Research conducted by Oregon State University showed that the Super Conditioner could reduce the drying time of hay by one-third to one-half.  A reduction in drying time would provide a larger window of opportunity for producers to harvest high quality hay and improve profitability while minimizing the threat of the hay getting rained on.

Two hay dry-down studies were conducted at a producer’s farm near Palmyra, Wisconsin during 2001.  The first study was implemented on May 30th and compared four hay-conditioning treatments in a randomized complete block design with three replications.  Treatments included a Kuhn discbine mower without a conditioner which served as an unconditioned control, a New Idea 5209 discbine with a crimper conditioner, the Kuhn mower followed by the pull-type Super Conditioner and the New Idea 5209 with crimper conditioner followed by the pull-type Super Conditioner.  Hay moisture levels were collected over time from cutting to harvest.

A second study was conducted during July to compare the producer’s regular hay making routine versus the use of the Super Conditioner. The study consisted of two treatments and was replicated two times.  The first treatment, which matches the producer’s regular hay making routine, was the New Idea 5209 discbine and conditioner followed by another pass over the windrow with a New Holland 402 crimper to further fluff the hay and decrease the drying time.  The second treatment was hay mowed with the New Idea 5209 discbine with the rollers spread open so they would not condition the hay.  The pull-type Super Conditioner was then used to condition the windrow. 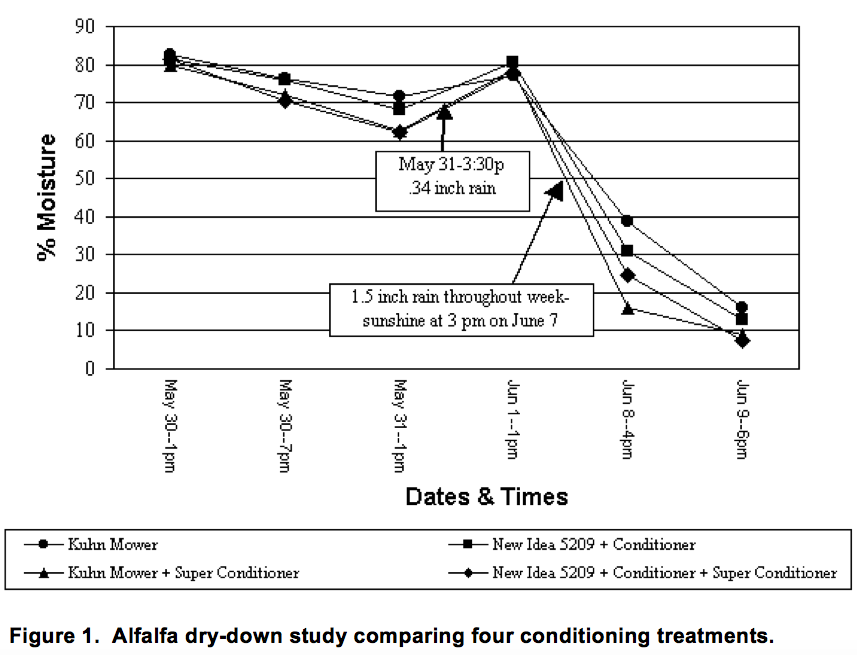 The results of the first dry-down study are shown in Figure 1.  Moisture levels collected just after initial cutting were not significantly different (Table 1).  Within 6 hours after cutting the two treatments that included the Super Conditioner were significantly drier than the other treatments.  It took nearly a day before a significant difference was observed between the New Idea mower and conditioner versus the mower-only control.  Many producers questioned what impact rainfall would have on the Super Conditioned hay since the entire stem of the plant was split open by the rollers.  By mid-afternoon on May 31, the study received 0.34 inches of rainfall which helped answer some of those questions.  The moisture levels of alfalfa with the Super Conditioned treatments increased most rapidly after the rainfall.   The moisture content of the New Idea and conditioner treatment increased also, but not as rapidly as the Super Conditioned hay. 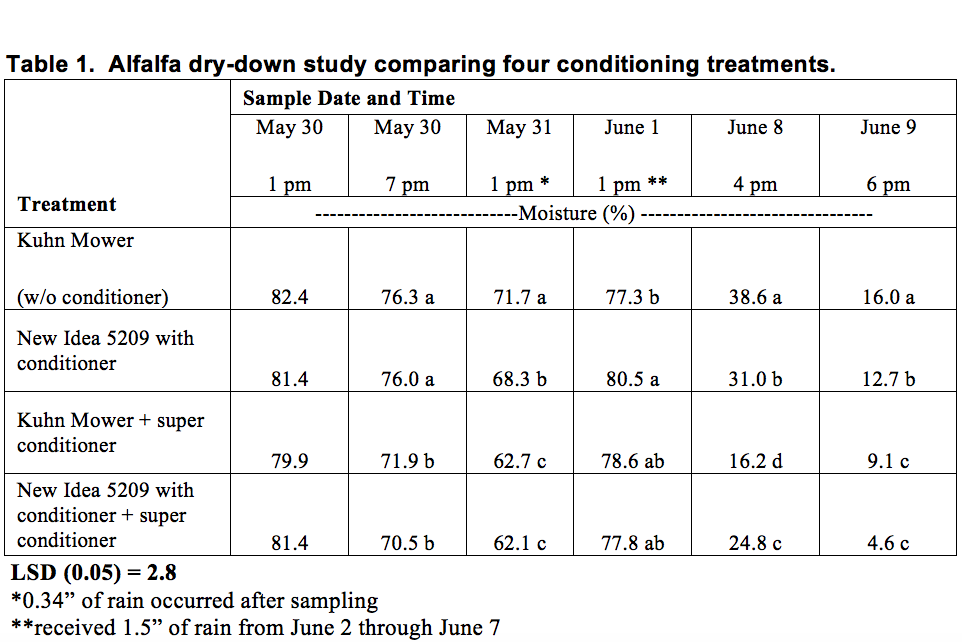 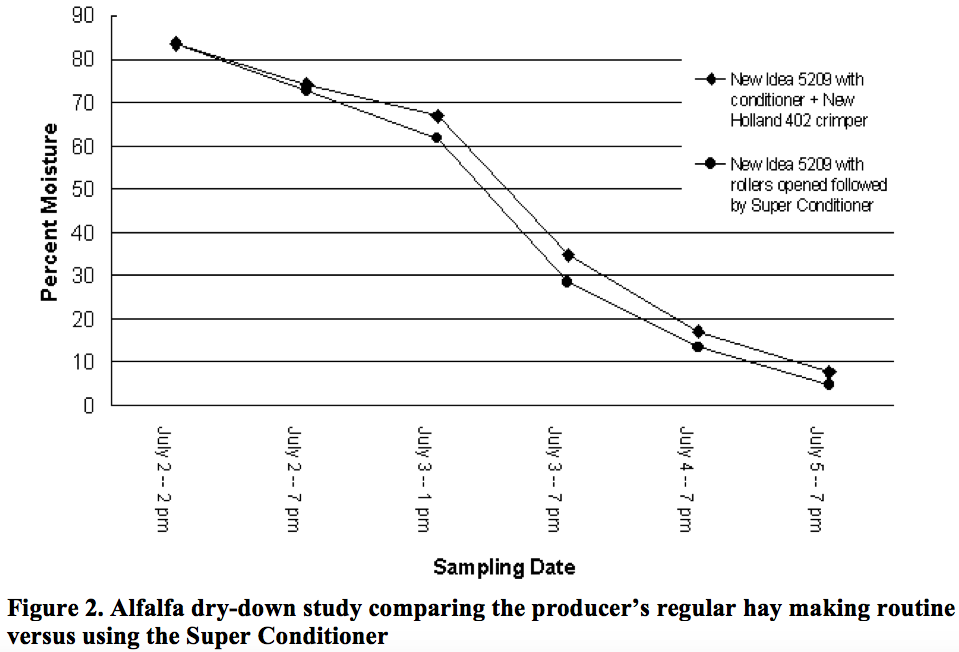 Hay quality of the first study was analyzed at harvest using the wet digestion method (data not shown).  The relative feed value of the Super Conditioned hay was approximately 20 points lower in relative feed value (RFV) than the other treatments.  However, much of the difference between RFV’s between the treatments was likely attributed to the hay being raked twice after the 1.5-inch rainfall without considering of the moisture content of the hay.  The Super Conditioned treatments were drier at raking and appeared to have lost substantially more leaves than the other treatments.

The results of the second dry-down study are shown in Figure 2.  In this study, the producer’s typical haymaking routine was found to have a similar dry-down rate compared to the Super Conditioned treatment.  Although similar, significant differences in moisture were observed between treatments within five hours after cutting (Table 2).  After that sampling period, moisture levels of the Super Conditioned treatment remained approximately 5% lower than the other treatment throughout the study.  The hay in this study would have been ready to bale approximately four hours earlier with the Super Conditioner treatment.

Does it pay?  Although the drying time of hay was not reduced by one-third to one-half, as documented by Oregon State University, the Super Conditioned hay in this study did dry significantly faster, from four hours to a full day improvement, over the other treatments.  With a retail price tag of approximately $21,000 for the pull-type unit or $13,000 for a complete roller conditioner kit that will attach to nearly any make of haybine, careful cost comparisons will need to be made between the various systems.  It appears that the Super Conditioner can save money by eliminating additional passes over the field, perhaps eliminate an extra tractor and equipment, reduce fuel and labor requirements, reduce the amount of preservatives needed since the hay dries faster and potentially improve hay quality at harvest by minimizing the risk of rain falling on the hay.  If you’re in the business of making quality dry hay, and a lot of it, then the improved dry-down rate from several hours to a day earlier, as documented by these studies, could certainly help to justify the price.  Producers will need to evaluate and decide for themselves whether the improvement in drying rate will pay for the equipment over time.